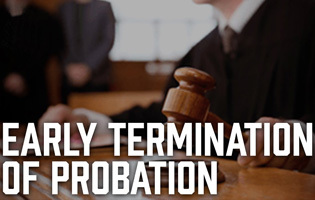 Penal Code 1203.3 PC allows a judge to terminate your probation early, but they are only granted if you can show "good cause."

California Penal Code Section 1203.3 gives a judge the authority to terminate your probation early. However, it's important to note that these requests are granted only if you can show the court good reasons, which is commonly known as “good cause.”

If you are seeking early termination of your probation, contact the Los Angeles criminal defense lawyers at Eisner Gorin LLP. Under PC 1203.3, if you are currently on probation, you can file a petition to the court requesting to terminate your probation early.

After you have been convicted of a crime, the court will order a period of probation, and a level of supervision, which will vary based on whether your conviction was a misdemeanor or felony offense.

Frequently, someone who had pleaded guilty to misdemeanor crimes such as driving under the influence (DUI) is put on probation from three to five years. The length of this probation typically makes it very difficult for people to find employment or obtain a professional license.

If you are on currently on probation, you may have already experienced being denied certain professional opportunities due to being on probation. If a judge decides to grant your petition for early termination of probation, the court will frequently expunge your criminal record.

If your case is a felony “wobbler,” the judge could also to decide to reduce your felony offense to a misdemeanor. However, it's important to note here that before the judge will grant terminating your probation early, they will want to know whether you have successfully completed the terms of your probation.

This includes paying your fines, restitution, and completed any court-ordered classes. Now that we have covered a general overview of early probation termination, let's take a more thorough review of the process below.

It should be noted that while Penal Code Section 1203.3 gives authority to the court to grant early release from probation “at any time” during probation, most judges in Los Angeles County will want to see proof that you have successfully completed at least 12 months or more of your probation before they will give any serious thought to terminate probation.

The legal process for early termination of probation will require a formal hearing where the judge will determine your eligibility. This hearing is commonly known in all Los Angeles County Criminal Courthouses as a “motion to modify probation.”

Your criminal defense lawyer will need to file a motion with the court and prosecutor's office at least 2 days before the date of the requested hearing. Additionally, they should talk to the prosecutor about your request for early probation termination.

In some cases, your criminal lawyer can make the appearance on your behalf, meaning you don't have to attend, but this might not be in your best interest. Speak to your lawyer about the strategy.

Typically, judges will not grant your petition for early release from probation unless you have met the following eligibility requirements:

If you meet these eligibility requirements above, the court can terminate your probation when your good conduct and reform justifies the action. This means the court is convinced you not a public safety risk, learned a lesson, and you are moving forward in a positive direction.

If you have any questions about your eligibility for early termination of probation, call a Los Angeles criminal defense lawyer at our office.

While the Los Angeles County judge is attempting to decide whether to grant your early termination from probation, they will typically consider several important factors, including:

There are other considerations as well, such as whether your probation status is preventing travel that is necessary. For example, you might have an ill family member who lives in another country and you can't travel while still on probation.

The Hearing for Early Probation Termination

At the hearing, your criminal lawyer will make a request to the judge to grant your motion for early termination of probation by explaining your good conduct and reform justifies the request and early release from probation, and it would best serve the interests of justice.

The Los Angeles county prosecutor will also have an opportunity to respond to your motion and could present an argument against granting your motion. After both sides have completed their arguments, the judge will then need to make a ruling. The judge has wide discretion on ruling on an early termination of probation petition.

If the court discharges your probation status, probation will terminate, relieving you of any further obligations.  If the court denies your petition, you can re-petition the court later, if your motion to terminate was not denied with prejudice.

As you can see above, the eligibility and process for early probation of termination motion can be complex. Therefore, it's highly recommended you contact our Los Angeles criminal defense attorneys at our law firm for assistance with your petition.

How Can Early Probation Termination Help Me?

We are often asked about what exactly are the benefits of early release of probation? While there are the obvious answers, there are a few other major benefits that you may not know.

This alone could prove very beneficial in securing a job as most employers will not hire you with a conviction. Additionally, an expungement after early probation termination could assist you in petitioning the court for other relief.

In some circumstances, you might be able to obtain relief from your lifetime obligation to register as a sex offender under California Penal Code Section 290, and have your information removed from Megan's List. It could also help you restore your California gun rights.

There is also another benefit in early probation termination that may not seem so obvious. When you obtain an early release from probation, it ends your risk of being charged with probation violation. Remember, if you are arrested while on probation, the judge will normally give you a jail sentence for violating your probation even if you are not convicted of the new offense.

In order to determine your eligibility and to discuss other benefits of early probation termination, call our Los Angeles criminal defense law firm.

If you want to file a petition for an early termination of probation and you qualify, you should contact the Los Angeles criminal defense law firm of Eisner Gorin LLP. Having experienced attorney's familiar with the process and who how to present a convincing argument on your behalf can give you the best chance of success.

Our law firm has been successfully helping clients terminate their probation early for decades. Let us review your case and probationary status to determine the best strategy. Contact our law office at 877-781-1570.