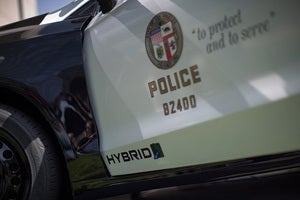 PC 538d makes it a crime to wear an authorized law enforcement uniform with intent to induce someone into believing you are a peace officer.

Impersonating a police officer law is covered under California Penal Code Section 538d. In basic terms, it's a crime to wear an authorized law enforcement uniform with the intent to fraudulently impersonate or induce someone into believing you are a peace officer.

PC 538d is a misdemeanor offense that carries a sentence of up to one year in the county jail and a fine. It's also a misdemeanor offense to wear a badge to make it appear you are given the authority of a police officer, if the badge is similar to an authorized police officer badge that a reasonable person would be deceived into believing it gives you the authority of a peach officer.

Under Penal Code 538d, the intent is the key element of the crime. In other words, California law requires that you specifically intended to fraudulently cause someone to believe you are a peace officer.

It's important to note you can still be charged with impersonating a police officer even if no harm was caused and you obtained no benefit from your actions. A closely related crime is false impersonation under California Penal Code 529.

An example of an impersonating a police officer case includes the situation in Ventura, CA where a man was arrested for posing as a Los Angeles Police Department officer. Police were called about suspicious men who were just standing next to a police squad car, with one of them wearing what appeared to be a police uniform.

When they arrived, they discovered the man was in full LAPD uniform, with a badge, police belt and a gun. He was standing next to a black and white patrol vehicle with the word “police” on the side and it even had a light bar attached to the top of the vehicle. After a quick investigation, police discovered the vehicle was sold years ago. They arrested the man for impersonating a police officer and impounded the vehicle.

His motive was not clear, but as you can see in this example, he was still arrested even though it was determined there was no harmed caused by his actions of wearing the police uniform.

If you have been accused of impersonating a police officer, you need to contact the Los Angeles criminal defense lawyers at Eisner Gorin LLP. Our attorneys will need to review the details of your situation in order to formulate a plan to defend you.

Now that we have covered a basic overview of impersonating a police officer charges, let's take a look at the legal definition, penalties, and defenses below.

PC 538d also criminalizes the act of willfully making, selling, or giving another person a badge or insignia which appears to be authorized for use by peace officers. While this may seem obvious, it's should be noted here that Penal Code Section 538d is not designed to target people who are playing a prank on friends by dressing up as a police officer.

Under California law, it requires intent that you fraudulently caused another person to believe you are an officer. For example, let's say there is a spike in the crime rate in your neighborhood, and you feel something must be done immediately.

You obtain a police uniform and start walking around the area with the intent for others to believe you are a police officer hoping to make criminals think twice before engaging in unlawful activity.

In this example, you could face charges of impersonating a police officer because you were wearing a law enforcement uniform with the intent to induce others into believing you are a police officer. If you need addition information, contact our Los Angeles criminal defense law firm.

If you are convicted of impersonating a police officer, in violation of California Penal Code Section 538d, you are guilty of a misdemeanor crime. The legal penalties include:

Our Los Angeles criminal attorneys could use a wide range of legal defense strategies on your behalf against charges of impersonating a police officer.

It's important to understand that every criminal case has its own unique set of facts and circumstances. Clearly, the main element of the crime that the prosecutor has to prove in order to obtain a conviction is your intent.

In many cases, criminal intent is difficult to prove beyond any reasonable doubt. Without intent, you were just someone wearing a police uniform or holding a police badge. Intent is most critical part for the prosecutor to establish guilt.

Our lawyers might be able to make a successful argument you were just playing a prank without thinking anyone would ever actually believe you were the police.

In other words, you had no intent to fraudulently impersonate a peace officer or make anyone think you were a police officer. If our lawyers can cast some reasonable doubt on the critical element of intent, you might be able to avoid a conviction.

It's important to note the best defense strategy will start from the moment you are arrested. You are innocent until proven guilty. It's critical to retain our criminal defense law firm early into your case to have the best chance of a more favorable outcome.

We will immediately carry out our own investigation and prepare for your defense. We can negotiate with the prosecutor for reduced charges or even a case dismissal.

If you have been accused of impersonating a police officer that violates California Penal Code Section 538d, you should contact a Los Angeles criminal defense lawyer at Eisner Gorin LLP.

A conviction could have life-altering consequences. We are expert courtroom negotiators and may be able to have your charges reduced to a lesser offense or even dismissed.

If you case proceeds to trail, we are aggressive criminal lawyers who have the experience to obtain the best possible outcome on your case.

Let our law firm review the details of your case and discuss legal options.