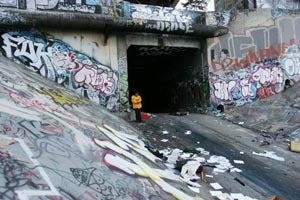 Penal Code 594 PC vandalism is described as maliciously defacing property with graffiti or other form of written material.

The experience of having your child arrested for any type of crime is probably one of the most stressful situations in your life. Kids make bad decisions and mistakes. Peer pressure to be a “cool kid” is often enormous.

One of the most common juvenile crimes is vandalism, which is described as intentionally destroying the property of another.

In Los Angeles County, there are several common types of juvenile vandalism cases.

These include graffiti on school buildings or highway overpass and signs, smashing windows on buildings and vehicles, slashing car tires or keying a vehicle, or causing damage to a school or Church property.

However, the most common form of vandalism is graffiti. In fact, vandalism is commonly known as tagging, graffiti, or defacing property. Due to significant rise in graffiti cases, the police and Los Angeles County courts have cracked down on these types of offenses.

Even though graffiti only causes property damage, it can be charged as a misdemeanor or felony crime based on the amount of damage caused to the property. Any juvenile graffiti charges against your child should be taken seriously as the legal consequences can be severe.

If your child has been charged with vandalism, it's important to consult with a Los Angeles juvenile criminal defense attorney at Eisner Gorin LLP as soon as possible. Our lawyers understand that your child's future may be at stake.

Our law firm will closely examine the details of the case, legal options on fighting the charges, and help you understand the consequences of a conviction. Let's examine the legal definitions of vandalism and the closely related graffiti laws below.

California Penal Code Section 594 legally defines vandalism as maliciously defacing with graffiti or other form of written material, damaging or destroying another person's property. Vandalism can come in many forms.

In order to be convicted of vandalism, the prosecutor must be able to prove ALL the specific elements of the crime. These elements include:

Defacing with graffiti or other inscribed material means any unauthorized writing or drawing on property using just about any kind of tool. There is no legal requirement the defacement with graffiti is permanent. Vandalism is known as a “wobbler” offense.

This means the case can be filed as a misdemeanor or felony crime, depending on the defendant's criminal history and the total cost to repair the damage. If the cost of repair the is less than $400, the prosecutor will file a misdemeanor vandalism case.

If the cost to repair is over $400, the prosecutor has the option of charging the defendant with either a misdemeanor or felony case. Consult with a Los Angeles juvenile criminal defense lawyer at our law firm for more information.

On a felony vandalism case where the total damages to property exceed $10,000, the legal penalties can be enhanced.

Furthermore, if the damaged property was owned by a certain organization of religion, race, or other protected group, there could a hate crime special allegation or enhancement, if there is evidence the act targeted the group.

Typically, this would include cases where the defendant defaced their structure with threatening messages or a racial epithet.

Charges that are related to vandalism include:

An experienced juvenile criminal defense attorney can utilize a wide variety of common legal defenses against vandalism charges. These include:

The Los Angeles County juvenile court system does recognize that juveniles frequently made bad decisions and generally deserve different treatment than an adult. In juvenile cases, the emphasis is on rehabilitation rather than punishment.

Unlike adult court, in which cases are adjudicated through the formal criminal process after the filing of criminal charges, juvenile cases provide another avenue for resolution before court: informal supervision through the probation department.

Our Los Angeles juvenile defense attorneys believe in an immediate pre-filing intervention, where we will work aggressively to dissuade the police and prosecutor's office from filing formal charges in juvenile court.

If charges have been filed and your child is detained by police, our law firm will work aggressively at the arraignment to ensure the release of the child at a Juvenile Detention Hearing.

In Los Angeles County, there are important distinctions between juvenile court procedures and adult criminal procedures. For example, there is no right to bail, and a minor charged in a juvenile court is not heard by a jury, but rather a judge decides the case.

For these reasons, it is important that you seek legal assistance from an experienced Los Angeles juvenile criminal defense attorney at Eisner Gorin LLP.