Purposes of a Preliminary Hearing in California State Felony Cases 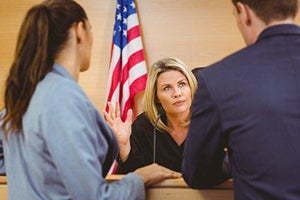 At a preliminary hearing in California, the prosecutor must establish, based on the preponderance of the evidence, you committed the crime charged against you.

A preliminary hearing, or “prelim,” is one of the critical stages in a felony prosecution under California State law.

It's designed as a system where the prosecutor has to demonstrate to the judge there is sufficient evidence to believe a crime was committed.

A preliminary hearing is commonly called a probable cause hearing and it's essential purpose is to weigh the sufficiency of the evidence. It also give both sides an early look at the prosecutor's most likely witnesses.

At the preliminary hearing, it's the District Attorney's burden to:

For more information or a review of your felony case, contact our California criminal defense lawyers at Eisner Gorin LLP. Let's take a closer look below.

Showing Some Evidence of Guilt

In simple terms, a preliminary hearing is to show the judge the prosecutor hasn't filed frivolous charges against you and there is at least some evidence showing your guilt.

These hearings are typically over very quickly, but there are some that can take several days. Either way, the evidentiary standard is relatively pretty low and the prosecutor need only call one witness to establish the burden of proof.

The legal purpose of a preliminary hearing, from the court's perspective, is to evaluate whether there is sufficient evidence to “hold the defendant to answer,” meaning to move the case forward to the trial court.

Preliminary hearings are essentially sorting mechanisms to weed out particularly weak felony cases which would be a waste of judicial resources and time to try in front of juries. However, as discussed below, preliminary hearings afford the defense several important strategic and tactical opportunities.

A preliminary hearing has many of the same features as a jury trial. In cases where it's appropriate, your criminal defense attorney could offer an affirmative defense to the allegations against you, but this doesn't happen often as it will let the prosecutor know the potential defenses you will use at trial.

At the preliminary hearing, witnesses present live testimony. There are legal arguments by the prosecutor and defense attorney.

The judge rules on evidentiary issues such as motions to suppress or other evidentiary objections to the evidence being presented. Exhibits, consisting of documents or other physical evidence, are introduced.

The main difference between a preliminary hearing and a trial is that the trier of fact is the judge, not the jury. The other important difference is that the burden of proof, while still falling on the prosecutor, is much lower.

At trial, the charges must be proven beyond a reasonable doubt, the highest standard of proof in the law. At a preliminary hearing, the burden is only probable cause.

Additionally, certain rules of evidence are relaxed at a preliminary hearing. In particular, Proposition 115 allows the prosecutor to present otherwise hearsay evidence through a qualified law enforcement officer.

In the ideal scenario, the defense will be able to undermine the credibility of the government's witnesses and other evidence to the point where the court cannot find probable cause to hold the defendant to answer.

This results in the case being dismissed. However, even if the case is not dismissed outright, the preliminary hearing is critical for several other purposes.

Once the witness admits certain facts or describes an interaction a certain way at the preliminary hearing, it becomes strategically impossible for them to contradict themselves later at a trial because their prior testimony will be revealed to the jury, thereby fatally undermining their credibility.

Exposing Weaknesses in the Prosecutor's Case

Second, exposing weaknesses in the government's case is often an effective way to obtain an improved settlement offer.

Before a preliminary hearing, it is often difficult to assess exactly how strong the evidence is against the defendant. The credibility of the witnesses in the case is difficult, if not impossible, to properly assess until they have been subjected to cross-examination.

The government may reasonably think they have an airtight case against the defendant only to discover that one or more witnesses is compromised, either because of information uncovered through independent defense investigation, or because the witness simply does not present themselves well on the stand.

Once the government becomes aware of these weaknesses, they may decide to cut their losses by offering a favorable plea deal to the defendant to avoid the risk of losing at trial.

The same principle works in reverse. The defendant may believe that there is no, or weak, evidence of their guilt. After the preliminary hearing, at which the defendant will get to hear the witnesses present the evidence in person, their assessment may change.

Whether it is the government's expectations or the defendant's expectations of the likely outcome at trial that change, it is often the case that felony matters settle shortly after preliminary hearing when the state of the evidence becomes much more certain.

At the end of the preliminary hearing, your defense lawyer can make a motion to dismiss based on insufficient evidence. If the judge denies the motion, you will be “held to answer” for the charges against you.

This means the judge is satisfied there is enough evidence for the prosecutor to continue the case. Next, your case will be transferred to a trial court where you will be arraigned again on the information.

Whether the result is a dismissed case, damage to the credibility of the government's witnesses in preparation for trial, or a case settlement, aggressive litigation of the preliminary hearing by an experienced criminal defense attorney is key to achieving the best possible outcome in a felony case.