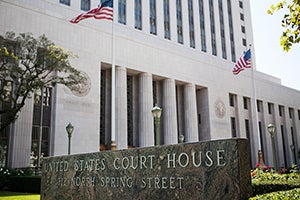 In federal courts, an effective sentencing position memorandum submitted before sentencing is crucial to achieving the best outcome.

While many aspects of federal criminal practice are similar to State practice – jury trials where the Government must prove the charges beyond a reasonable doubt, prefiling interventions to attempt to prevent the filing of charges before court and negotiations with the prosecutor for lesser charges, etc. – one area where substantial differences exist is sentencing of the defendant.

In California State court, sentencing pursuant to a negotiated plea deal with the prosecution is almost always a sure thing for our clients.

The exact sentence which the defendant will receive is agreed upon between the parties prior to entering a Guilty or No Contest plea, and the judge's role is simply to approve the deal, which occurs in almost 100% of cases.

Even when facing sentencing after being found guilty at trial, or when entering an “open plea” to the court, defendants in State court can still predict with a fair amount of certainty what the likely sentence will be as the judge's discretion is limited by California's determinate sentencing scheme.

Under the California Penal Code, for most serious offenses, the judge is required to select from a low, middle, or high term sentence.

For example, a crime might be punishable as a “2, 3, 5,” meaning that a defendant convicted of that crime must be sentenced to either 2, 3, or 5 years in the California state prison.

The judge could not, for example, decide the defendant should be sentenced to 7 years, absent other charges or enhancements. However, in federal courts in the United States District Court for the Central District of California and throughout the country, the federal judge has much more discretion in determining a sentence. Let's examine below.

In federal courts, a sentencing judge has substantially more discretion to impose an appropriate sentence. This means that effective advocacy at the sentencing hearing, and particularly in crafting an effective sentencing position memorandum to submit to the court prior to sentencing, is critical to achieving the best outcome.

A federal judge's substantial discretion means that convictions for the exact same offense can result in wildly different sentences depending on the advocacy of both the Government's and defendant's attorney.

In federal sentencing, the analysis begins with the United States Sentencing Guidelines.  At the most basic level, the guidelines match up offense conduct, meaning the particular criminal conduct of which the defendant has been found guilty, with the defendant's prior criminal history, yielding a guideline “range,” in the form of months of imprisonment. It's important to note there have been changes in federal sentencing under the First Step Act.

For instance, a particular crime might be listed under the guidelines as an offense level 18. If the defendant has no prior criminal history, they would fall under criminal history category I, resulting in a guidelines range of 27 to 33 months in federal prison.

However, federal judges do have the discretion to “depart” from sentencing guidelines if they are presented with specific mitigating circumstances.

While at first glance the guidelines appear mechanical in their application, an experienced federal criminal defense attorney will present a sentencing position for their client which addresses the many provisions in the guidelines which allow for a “departure,” from the guidelines range.

It should be noted that every reason asserted for a downward departure should be documented and supported by evidence in your sentencing memorandum.

Some mitigating reasons for downward departures from sentencing guidelines include the following:

Some common departures include a two or three-level downward departure for the defendant's early acceptance of responsibility for their conduct. In our example above, the addition of this one departure would change the guidelines range to 18 to 24 months.

Minor Role in the Crime

Another common departure is a two-level reduction in offense level for the defendant's minor role in the crime. Suppose our defendant is part of a fraud scheme, but was significantly less involved than most of the other participants.

Added to our previous example, this further two-level reduction would yield a guidelines range of 12 to 18 months. As you can see, the application of only two of the dozens of possible departures under the guidelines has cut the defendant's guidelines range in half.

While the guidelines are the starting point in federal sentencing, they are only advisory. The sentencing judge can also vary from the guidelines range based on a number of factors relating to the particular defendant, such as the defendant's history and characteristics as listed above.

These variances can result in a sentence either below or above the advisory guidelines range. This aspect of sentencing also requires effective advocacy to lay out a compelling mitigating case for the lowest possible sentence.

As stated above, mitigating factors could include the defendant's traumatic past, mental health or substance abuse issues, positive efforts in the community such as community services, etc.

Given the generally much more stiff penalties associated with federal crimes, every possible factor must be effectively presented to persuade the judge to exercise their discretion in varying downward from the guidelines range.

If you can't secure a departure, you might be eligible for a variance. As discussed above, while a downward departure involves using the sentencing guidelines to lower the applicable sentencing range, a variance is a sentence that is outside the guideline range.

A judge could utilize a downward departure in determining the applicable sentencing range as well as a variance below that guideline range while determining your sentence. In a most ideal situation, a variance might result in probation in spite of a guideline range of a term of years for a federal criminal conviction.

Plea bargaining in federal criminal cases is also critical because it often limits the defendant's and the Government's ability to argue for specific departures or variances.

As opposed to State court, where plea deals are typically arrived at informally between attorneys, federal plea agreements are lengthy legal contracts which are executed and then filed with the court.

These documents include a factual basis for the plea which the defendant must admit to as well as agreements from both sides about the scope of sentencing factors which may be argued.

In other circumstances, the Government and the defendant may commit to a certain loss amount attributable to the defendant's conduct, which affects both the guidelines range and the possible restitution obligations of the defendant.

As all the details of the plea agreement have material impacts on the arguments available at sentencing, effective representation with an eye toward achieving the minimum sentence is necessary from the very beginning of the process.

Our law firm handles all types of federal offenses, including:

We have only begun to scratch the surface of the very involved and complex process of federal sentencing. Representation by an experienced federal criminal defense attorney at every stage of the proceedings is critical to achieving the best possible outcome.

If you, or someone you know, is facing federal criminal charges, please contact us immediately for a consultation with one of our experienced attorneys.