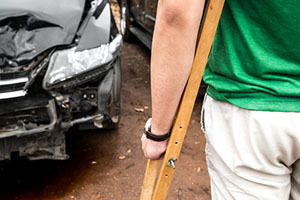 Vehicle Code 23153 describes the crime of driving under the influence causing physical harm to another person.

The crime of DUI causing injury is described under California Vehicle Code 23153 as driving under the influence of alcohol or drugs and then causing physical harm to another person.

DUI causing injury is a “wobbler,” meaning the prosecutor can file the case as either a misdemeanor or felony crime.

It should be note driving under the influence under this statute includes:

California Vehicle Code 23153(a) and 23153(b) defines driving under the influence causing injury as:

“It's unlawful for anyone, while under the influence of alcoholic, or 0.08 percent or more, by weight, of alcohol in their blood, or while under the influence of any drug, to drive a vehicle and concurrently do an act forbidden by law, or neglect any duty imposed by law while driving the vehicle, which act or neglect causes bodily injury to any person other than the driver.”

These crimes are the more aggravated form of a standard driving under the influence offense, which is covered by Vehicle Code Sections 23152(a) and 23152(b).

As with a standard driving under the influence charge, Section 23153 is separated into both an “A” count and a “B” count.

To give readers a better understanding of driving under the influenence causing injuries, our California criminal defense lawyers are providing an overview below.

Vehicle Code 23153(a) count criminalizes driving under the influence of alcohol resulting in injury regardless of the actual blood alcohol concentration of the defendant.

To be found guilty of VC 23153(a) the prosecutor must prove the defendant lacked the ability to drive with the ordinary caution of a sober driver.

Vehicle Code 23153(b) count, by contrast, depends on a scientific determination that the driver who caused injury had a blood alcohol concentration at the time of driving that was .08% by weight, or higher.

It should be noted that proof of bad driving, though common given the requirement that injury occurs, is not in fact required for a conviction under Section 23153(b).

In the vast majority of cases, both the VC 23153(a) count, and VC 23153(b) count are alleged against the defendant who is prosecuted under Vehicle Code Section 23153.

It should be noted that under California Vehicle Code 23153, you must act in a negligent manner, or break a law in addition to driving under the influence.

In simple terms, it must be your act or negligence that caused an injury to another person.

Vehicle Code Section 23153 prosecutions can proceed as either misdemeanors or felonies, making driving under the influence causing injury a “wobbler” under California law. This distinction is of substantial importance to the defendant.

In the case of a misdemeanor prosecution and conviction, the potential penalties include:

In the case of a felony Section 23153 prosecution, however, the penalties include:

There is a consecutive 3-6 six-year prison sentence if any victim suffers great bodily injury, or a consecutive one-year sentence for each additional person who suffered an injury.

There is also a “strike” on your record under California's Three Strikes Law is someone suffers a great bodily injury (GBI).

It should be noted that you could face separate related charges in addtional to VC 23153 DUI causing injury.

As with other DUI offenses, several defenses are common. The defendant may argue that the chemical test administered was inaccurate due to poor calibration or maintenance, improper technique by the administering officer, or other reasons.

The defendant may argue that the initial contact with law enforcement violated their constitutional right against unreasonable search and seizure or that incriminating statements were obtained from the defendant in violation of the right to remain silent or the right to counsel.

In the case of a blood test rather than a breath test, a blood split order can be obtained from the court to allow for independent testing of the blood sample by a retained defense expert chemist.

In some cases, the independent testing may reveal a lower blood alcohol concentration than that concluded by the government's lab technicians.

Given the substantially disparate treatment of misdemeanor vs. felony Section 23153 offenses, prefiling intervention before the case is formally filed in court is critical. Ultimately, a filing deputy district attorney has discretion to either allege a driving under the influence causing injury as a felony or a misdemeanor.

A criminal defense attorney, if retained early enough in the process, can have input with law enforcement and the filing deputy prosecutor to advocate for a misdemeanor rather than a felony filing.

A prefiling intervention in these cases will focus on the mitigating factors surrounding the defendant. This includes background, character, reputation, accomplishments, collateral consequences if convicted of a felony.

In addition, efforts at rehabilitation such as alcohol treatment, demonstration of remorse, etc., and factors surrounding the offense conduct itself, payment of restitution up front, relatively minor nature of the alleged injuries, etc.

In many cases, an aggressive prefiling intervention position, developed through collaboration between defense counsel, the defendant, and family members, will be successful in persuading the prosecutor to proceed with misdemeanor rather than felony charges.

This could apply even in cases where the essential elements of the offense - driving under the influence of alcohol and injuries sustained by a third party - are not factually contested.

Driving under the influence causing injury is a serious criminal offense under California law. Both before and after a filing, representation by experienced criminal defense counsel is critical to maximize the chances of a successful outcome for the defendant.

We can advise you on the steps to take, including before court through a prefiling intervention, to work to protect your rights, reduce charges where possible, and help avoid the particularly onerous punishments associated with a Section 23153 conviction.