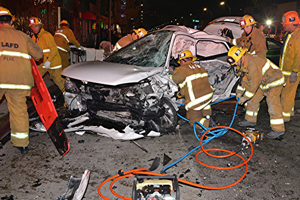 A “Watson murder” is a second degree murder charge if you drive while under the influence and another person is killed due to your conduct.

A California DUI murder charge is commonly known as a “Watson murder.” It's a second degree murder charge which can be filed if you drive while under the influence of alcohol or drugs and another person is killed due to your conduct.

It's charged when you have at least one prior California DUI conviction and were warned of the safety risks of driving under the influence; commit another DUI, which causes an accident that results in the death of another person.

A DUI murder is not a separate criminal offense. Rather, it's the description of the situation where Los Angeles County prosecutors will charge you with second degree murder, under California Penal Code Section 187, for committing a fatal DUI. Keep in mind that “murder” is an intentional act, but it's not always so clear.

In fact, California law has an often complex definition of murder, and it attempts to draw a clear distinction between murder and manslaughter. The basic difference is that murder is a death due to malicious behavior or a reckless disregard for human life. Manslaughter is a death due to a negligent act or carelessness with the safety of others.

This is the main reason that most deaths caused by driving under the influence in Los Angeles County are filed as a manslaughter offense.

It's clear that when an individual who drives drunk doesn't jump behind the wheel of their vehicle with a specific intent to harm someone. In most DUI cases, the driver is negligent, but there is no malicious intent to murder.

What is second degree murder in California? It's an unplanned killing of another person, while acting with “malice,” which is a conscious, knowing disregard for human life.

Driving under the influence is clearly a danger to human life as the driver's behavior counts as malice. More specifically, it's known as implied malice, or a knowing recklessness that is implicit in the driver's behavior. See related: Gross Vehicular Manslaughter While Intoxicated.

If you are facing a second-degree murder charge after causing the death of another person while driving under the influence, you should consult with a Los Angeles criminal defense lawyer at Eisner Gorin LLP.

In order for the prosecutors to prove you drank alcohol and caused a vehicle accident, they have to be able to prove you acted with a wanton disregard for human life. Our attorneys will work aggressively with proven defense strategies to obtain the best possible outcome on your case.

Now that we have covered a basis overview of Watson murder charges, let's take a closer look at the California legal definitions, penalties, and legal defenses below.

What is a Watson DUI Murder Charge?

The name “Watson murder” came from the California Supreme Court case, People vs. Watson, where they decided a DUI offender could be held liable for murder.

The decision created the possibility where you could be convicted of second-degree murder when someone in killed in an auto accident while you were driving.

However, it has to shown that you clearly knew that driving under the influence could possibly cause the death of another individual. If it can be shown you knew, then your conduct would count as “implied malice,” and you could face murder charges. There are two ways where you could be charged under this category of DUI murder:

As you can see above, the main reason you be charged with second degree murder is due to the fact you were specifically warned. Typically, when an individual is driving under the influence, they don't consider the risk to others, thus their action don't count as malice.

However, in the two categories above, you received warnings of the risk of drunk driving. Therefore, if you drove again while under the influence, you were acting with malice.

If you are convicted of reckless driving that involves alcohol, known as "wet reckless,” DUI, or DUI with injury, the court will read you the following admonition during your sentencing:

"You are being advised that being under the influence of alcohol or drugs impairs your ability to safely operate a motor vehicle.

Therefore, it's extremely dangerous to human life. If you continue to drive while under the influence, and, as a result of that driving, someone is killed, you can be charged with murder."

When you sign this Watson advisement, you are officially acknowledging that it's dangerous to human life to drive under the influence of alcohol or drugs, and if someone is killed while you are DUI, the Los Angeles County prosecutor will charge you with murder. Contact a Los Angeles criminal lawyer at our law firm for more information.

In order to be convicted of DUI murder, the Los Angeles County prosecutor has to be able to show you acted with "implied malice." This means they have to prove specific elements of the crime of a Watson murder. The elements include:

In order to prove you acted with implied malice and guilty of second-degree DUI murder, they will attempt to show you were given the Watson advisement and show you attended a DUI school, discussed above. Both still require you had at least one prior DUI conviction.

It's important to note the prosecutor does not need to show you intended to kill another individual. Instead, they only have to prove you intentionally committed an act that could would likely result in harm to another person.

Your act of driving while under the influence of either drugs or alcohol causes a substantial risk of harm to passengers in your own vehicle, along with other drivers. In simple terms, if you choose to drive a vehicle while intoxicated, this legal requirement is usually satisfied. Call our Los Angeles criminal defense law firm to review the details of your case.

If you are convicted of DUI second-degree Watson murder charge, you could face 15 years to life in a California state prison, a fine up to $10,000, a strike on your criminal record under California's Three Strikes Law, meaning you could receive severe legal penalties if it's your third strike, which includes the chance of 25 years to life in prison.

If there are victims who survived that suffered great bodily injury due to your behavior leading to a DUI murder conviction, you will receive an additional and consecutive DUI legal penalty of 3 to 6 years in a California state prison.

A skilled Los Angeles criminal defense attorney at our law firm can use a variety of legal defense strategies on your behalf. These include:

Challenging legal intoxication – One of the first steps our criminal lawyers will take is to challenge the credibility of the test that showed you were legally intoxicated. This includes attempts to discredit the accuracy of any chemical blood or breath test results.

Challenging police procedures – Our attorneys will thoroughly review all the facts and circumstances of your DUI arrest and investigation. We may be able to uncover mistakes or an unlawful police stop.

Challenging fault in the car accident – Our defense lawyers may be able to argue the auto accident was not your fault. We can use an accident reconstruction expert to investigate how the accident happened. In some cases, it may be possible to prove the other driver violated a traffic law and was driving in a negligent manner, thus showing you were not at fault, even if intoxicated.

In some Watson murder cases, our attorneys may be able to show you were never properly given a "Watson" admonition, or never completed a DUI school, meaning you were not warned of the risks of driving under the influence.

It's important to note that while these defense strategies might not result in dismissed charges, they could result in your murder charge being reduced to a lesser offense.

If you or a family member is facing a DUI second-degree Watson murder charge, you need to immediately consult with a Los Angeles criminal defense attorney at Eisner Gorin LLP. Our lawyers are have decades of combined experience and dedicated to obtaining the best possible outcome on your case.

We are former Los Angele County prosecutors and know how a Watson murder case against you will be built. The first step is to let our law firm closely review the facts and circumstances of your case in order to start preparing a solid strategy to defend you.