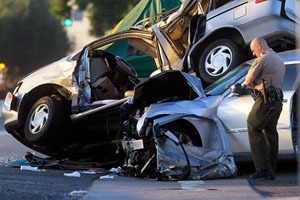 Penal Code 192(c) PC vehicular manslaughter is described as causing the death of someone while driving a vehicle in a negligent unlawful manner.

Vehicular manslaughter is covered under California Penal Code Section 192(c). Manslaughter is the killing of another person, but without prior intention.

Vehicular manslaughter means you caused the death of another while driving a vehicle, by committing a negligent unlawful act, or even a lawful act that could cause death.

In other words, it means you killed another person by driving negligently. Under Penal Code § 192(c), you can be charged with vehicular manslaughter if a death occurred from negligent or distracted driving.

For example, you run a red light and collide with another vehicle, killing the driver.

Vehicular manslaughter is either a misdemeanor offense or it could be a “wobbler.”

This means the Los Angeles County prosecutor has the discretion to charge the case as either a felony or misdemeanor crime.

Typically, if you conduct was determined to be ordinary negligence, you will be charged with misdemeanor homicide.

If you conduct was determined to be gross negligence, the prosecution has the option to charge you with a misdemeanor or felony offense. It's important to note and understand that gross negligence is far different than just ordinary negligence.

By itself, negligence could just mean being careless, inattentive or simply making a mistake in judgment.

However, gross negligence means you acted with such a high level of recklessness; it caused another person's death, and any other reasonable person would have known this type of conduct could create a high risk.

In vehicular manslaughter cases in Los Angeles County, gross negligence often involves substantial serious reckless conduct or another serious breach of reasonable care, such as driving at a high rate of speed down a residential street and running s stop sign, causing you to collide with another vehicle, killing the passenger.

It's important to understand that a person acts with gross negligence when their acts are so far different from how any reasonably ordinary careful person would act in the same situation, and their acts amounted to a disregard for human life or indifference to the consequences of their act.

Vehicular manslaughter charges can also result from distracted driving. For example, if you strike and kill a pedestrian in a crosswalk while texting behind the wheel of your vehicle.

Early intervention into your case by our law firm can result in a more favorable outcome. See related: Reckless Driving.

Now that we have covered a general overview above of vehicular manslaughter charges, let's take a more thorough review of the legal definition, penalties, and legal defenses below.

Under California Penal Code Section 192(c), the crime of vehicular manslaughter is legally defined as follows:

This legal definition above means vehicular manslaughter always occurs while you are operating a motor vehicle, and it's the unintentional homicide that was caused by your ordinary or gross negligence.

In basic terms, ordinary negligence is failing to use reasonable care to prevent reasonably foreseeable harm to another person.

This means you are negligent if you act in a way a reasonably careful person would not act in the same manner in the same situation. In contrast, gross negligence is much more than just ordinary carelessness.

This means you were grossly negligent if you acted in reckless way that created a situation of a high risk of death or great bodily injury, and a reasonably careful person would have known that acting in that manner would create such a risk.

Some examples where the Los Angeles County prosecutor will argue you acted with gross negligence includes situations where your were under the influence of alcohol or drugs, fell asleep at the wheel, or you were speeding and ran a stop sign at the time of the collision with another vehicle.

Call a Los Angeles criminal defense attorney at our office for additional information.

It should be noted that misdemeanor cases of vehicular manslaughter are not frequently pursued as the prosecutor will normally consider the underlying circumstances as well as the desires of the victim's family.

There are certain cases where an accident is simply an accident and the prosecutor might decline to even pursue criminal charges.

However, If the Los Angeles County can prove you were operating your vehicle “gross negligence,” causing the death of another person, you will be charged with the felony crime of gross vehicular manslaughter under California Penal Code § 192(c)(1).

Another section in the legal definition above includes vehicular manslaughter for financial gain.

What does that mean? This form of vehicular manslaughter can occur if you knowingly cause a vehicle collision in order to make a fraudulent insurance claim for financial gain, and the vehicle collision caused the death of another person.

In other words, you accidentally killed another person while intentionally colliding with another vehicle to commit insurance fraud.

In order for the Los Angeles County prosecutor to obtain a conviction for vehicular manslaughter, under PC 912(c), they must be able to prove all the elements of the crime beyond any reasonable doubt.

As you can see from the information above, determining ordinary negligence or gross negligence is the main element vehicular manslaughter cases.

Again, ordinary negligence simply means you failed to use reasonable care to prevent reasonably predictable harm to another person.

Other common examples are running a stop sign, driving the wrong way on a one-way street, improper turns, failing to use a turn signal, and failing to properly maintain your vehicle.

Contact our Los Angeles criminal defense law firm to review the specific details of your case.

If you are convicted of vehicular manslaughter as a felony offense, the legal penalties include 2, 4, or 6 years in a California state prison, and a fine up to $10,000.

If you are convicted of vehicular manslaughter for financial gain, it's always a felony crime and the legal penalties include up to 10 years in a California state prison, and a fine up to $10,000.

If you fled the scene of an accident, you could also be charged with California Vehicle Code 20001, hit and run,  and the prosecutor might allege and enhancement that might lead to additional 5 years in state prison.

If you are convicted of either vehicular manslaughter with gross negligence or for financial gain, the California DMV will revoke your driver's license and you will not be able to have it reinstated for at least 3 years.

If you are caught driving during this time, you will most likely face charges for driving on a suspended license under California Vehicle Code 14601.

A Los Angeles criminal defense attorney at our law firm can use a variety of legal defenses on your behalf against charges of vehicular manslaughter. These defenses include:

Your conduct was not negligent – In some cases, our attorneys may be able to cast reasonable doubt that your conduct was ordinary or gross negligence.

The legal definitions can sometimes be subjective and difficult to prove. Driving on the busy streets and highways of Los Angeles County often requires people to make split second decisions which are often hard to show they were negligent.

In other words, your conduct was not actually negligent under the circumstances and you were action as a reasonably cautious person.

For example, the victim did not act in a reasonable manner by running out suddenly in the street, causing you to collide with them.

Your negligence was not the cause of the victim's death – In certain vehicular manslaughter cases; it may be difficult for the prosecutor to accurately sort out exactly what happened in the auto accident.

For example, even if the prosecutor can prove you drove with negligence and another person died, we might be able to make a successful argument that negligence of another party was the cause of the victim's death.

If needed, our law firm can utilize the services of a expert witness, such as an accident reconstruction specialist.

There are several California laws that may be charged along with, or instead of California Penal Code Section 192(c), vehicular manslaughter. These include:

I was accused of vehicular manslaughter and Eisner & Gorin worked hard and were able to get me a not guilty verdict at trial. Another criminal lawyer referred me to their law firm. When I arrived, I had a meeting with Dmitry Gorin and Alan Eisner. Starting with the very first moment, I felt confident as they already had information about my case.

During the meeting, I gave them specific details about the incident and why I though I was charged with vehicular manslaughter. They asked specific questions and I immediately felt I had a strong ally on my side. I retained their law firm immediately. During the court process, we communicated a couple of times per week just to keep me updated on my case.

Dmitry and his entire legal team were involved and kept providing me with settle offers from the prosecutor. They always took the necessary time to give me advice on how I should proceed. We decided to take the case to trial.

All through the long three week trial process, they aggressively fought hard against the evidence. They were successful in disproving what the prosecutor was attempting to tell the jury. After deliberations, the jury came back with a not guilty verdict. – J.M.

If you are under criminal investigation or already charged with vehicular manslaughter, you will need to retain an experienced Los Angeles criminal defense attorney at Eisner Gorin LLP.

Our first strategy is to determine exactly what happened in order to start preparing an effective strategy to defend you. Your future is at stake. We offer a free immediate response. Contact us at 877-781-1570.