Loitering for the Purpose of Engaging in Prostitution – California Penal Code § 653.22 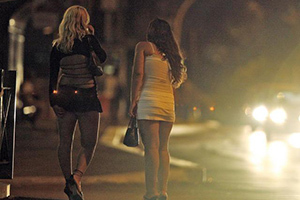 California Penal Code 653.22 PC makes it a crime to loiter in a public place for the purpose of engaging in prostitution.

California Penal Code § 653.22 makes it a crime to loiter in a public place with the intent to commit prostitution. This is a very similar, but distinct, crime to solicitation of prostitution, which also constitutes a misdemeanor.

Whether or not someone is loitering in a specific location with the intent to commit prostitution is a fact-intensive case-by-case inquiry which is typically undertaken using circumstantial evidence.

Individuals very rarely announce their intent explicitly, so the prosecution will rely on evidence that the manner and circumstances of the loitering openly demonstrate that the individual's purpose is to induce, entice, or solicit prosecution.

Penal Code § 653.22 does not apply to children under the age of 18 whose conduct would, if committed by an adult, qualify as unlawful loitering for the purpose of engaging in a prostitution offense.  However, children found in such circumstances may be found to be a dependent child of the court and be sent to foster care.

In order to give readers an understanding of California's law on loitering for the purpose of engaging in a prositution offense, our California criminal defense lawyers are providing an overview below.

California Penal Code 653.22 defines loitering for the purpose of engaging in a prostitution offense as follows:

The statutory language provides several examples of conduct which may be considered when determining whether the defendant has the intent to commit a prostitution offense. These include repeatedly beckoning to, stopping, or engaging in conversations with passersby as might indicate solicitation for prostitution.

Penal Code § 653.22 makes clear that the circumstances indicative of unlawful intent listed in the code section are not exclusive. The circumstances described are particularly relevant if they occur in and are which is notorious for prostitution activity.

No single factor is determinative of intent. Rather, law enforcement and a prosecuting agency will engage in a common-sense determination of whether a particular individual is loitering for prostitution purposes or simply loitering in general.

In order for the prosecutor to convict you of loitering for the purpose of prostitution under California Penal Code Section 653.22, the must be able to prove all the “elements of the crime” listed under CALCRIM 1156 Jury Instructions:

As stated above in many examples, it's important to note how police know you had intent to commit prostitution. In some cases, it's possible for a police officer to misinterpret actions of someone who just happens to be in the wrong public place.

Penalties for Loitering for Prostitution – PC 653.22

Loitering for the purpose of engaging in a prostitution offense is a misdemeanor under California law. The maximum punishment for a violation of Penal Code § 653.22 is six months incarceration in county jail, a $1,000 fine plus penalty assessments, or both.

While it is uncommon for a first offender to face jail time for a violation of this subsection, all factors including the defendant's prior criminal history, probation or parole status, if any, and the egregiousness of the particular conduct will be considered.

A conviction for Penal Code § 653.22 may also have adverse licensing or employment consequences depending on the defendant's occupation.

Defenses for Loitering for Prostitution – PC 653.22

If you have been accused of loitering for the purpose of prostitution, you need to retain an experienced defense lawyer. Depending on the circumstances of your case, we might be able to argue a valid defense to get the charges dismissed. Common defenses include:

Common defenses to a charge of Penal Code § 653.22 include lack of intent to commit a prostitution offense. Assuming the defendant was objectively loitering - i.e. remaining for an extended period of time in a public place with no apparent purpose to be there. The prosecutor must still additionally prove that said loitering was motivated by a desire to engage in a prostitution offense.

As stated above, the statute provides a non-exhaustive list of factors, or “clues,” which law enforcement and the prosecuting agency will attempt to use to infer an unlawful intent on the part of the defendant.

Ultimately, a jury must find beyond a reasonable doubt that the defendant's loitering was motivated by the desire to induce, entice, or solicit a prostitute.

The defense of entrapment may also be relevant in a Penal Code § 653.22 case.  Entrapment occurs when law enforcement, by its own conduct, inspires the defendant to commit, or attempt to commit, a crime which he or she was not previously disposed to commit but for law enforcement's intervention.

Put another way, a defendant cannot be held responsible for unlawful conduct which was largely inspired by law enforcement.

However, proving entrapment requires that the defendant meet a high burden as the prosecution can most often argue that the defendant would have engaged in the unlawful conduct anyway and that law enforcement's involvement was not the primary motivating factor.

If you, or someone you know, is charged with Loitering for the Purpose of Committing a Prostitution Offense under Penal Code § 653.22, call our Los Angeles criminal defense attorneys for an initial consultation.

It's important to consult with our defense lawyers right way as early intervention into your case by our law firm could make a huge different in the outcome. We have a track record of success with pre-filing intervention and may be able to avoid the filing of formal charges.

At Eisner Gorin LLP, we have over 60 years of combined experience defending all types of prostitution related case. Contact us at 877-781-1570 to review the details.