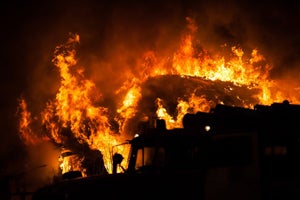 PC 451 & 452 PC describe arson as any willful, malicious or reckless act that causes a fire that burns a structure, forest, land, or property.

Arson laws are covered under California Penal Code Sections 451 and 452. Arson is any willful, malicious or reckless act that causes a fire that burns a structure, forest, land, or property.

An arson investigation is typically conducted by the county fire department where the fire occurred, but other government agencies can get involved for the purposes of a criminal prosecution or insurance coverage.

So, what's the difference? The difference in the conduct between the two levels is that misdemeanor arson is characterized by mere reckless conduct, whereas felony arson is willful and malicious conduct. In other words, being reckless is different than being malicious.

For example, acting “recklessly” means you were aware that your conduct presented a substantial risk of causing a fire, and ignored the risk. A common example could be a situation where you throw a burning cigarette from your car into brush along the highway, causing a fire.

Another example includes a situation where you build a campfire to cook some food in an area that has posted signs prohibiting any fires, and then a strong wind comes along starting a fire. In these examples, your conduct was reckless. Malicious arson means you set a fire willfully with the intent to damage or destroy it with fire.

In other words, you acted deliberately, and with premeditation. You act maliciously when you intentionally commit a wrongful act. In simple terms, you can be guilty of malicious arson if you intended to set a fire to harm another person or property.

If you are facing arson criminal charges, you need to consult with a Los Angeles criminal defense lawyer at Eisner Gorin LLP. Our attorneys will closely examine the specific details of your case in order to determine your best legal options moving forward. It's important that you remain silent and not make any statements to police detectives.

Now that we have discussed a basic overview of arson charges above, let's take a closer look at legal definitions, penalties, and potential legal defense strategies below.

Under California Penal Code Section 451, the crime of malicious arson is legally defined as:

By law, willfully means on purpose. Maliciously means you intentionally committed a wrongful act. A “structure” could include a building, home, motor vehicles, bridge, tent, or even a tunnel.  “Forest land” is any type of brush-covered land, woods, forest, or grasslands.

“Property” includes any type of personal property, such as furniture, vehicle, appliances, clothes, among many other items. In order for a prosecutor to convict you of malicious arsons, they must be able to prove the following elements of the crime:

Under California Penal Code Section 451.5, aggravated arson is a more serious offense and often more difficult to prove. In order to be found guilty, the prosecutor has to be able to prove all the elements of the crime. These include:

Aggravated arson charges are most common in situations where you are accused of setting a fire in revenge against someone, or in cases where you set a fire to a Church.

These are very serious charges with potentially harsh consequences. Consult with a Los Angeles criminal defense lawyer at our law firm for more information.

Under California Penal Code Section 452, the crime of reckless arson is legally defined as:

By law, recklessly means your conduct presented a substantial and unjustifiable risk of causing a fire, and you ignored the risk. Again, it's important to note the difference in the conduct causing the fire. Misdemeanor arson is characterized by reckless conduct, but felony arson is malicious conduct.

To set fire to or burn simply means to damage or destroy with fire all or part of something, even if it was just partial.

Legal Penalties for an Arson Conviction

This does not include any sentence enhancements, which would add time to the length of the sentence. You may have to also register as a convicted arsonist under California Penal Code Section 457.1. This registration would apply as long as you live in California. It would legally require you to notify law enforcement where you live.

This mandatory registration will apply if you are convicted of PC 451 with aggravating factors that resulted in a 10 year state prison sentence. It would also apply if you used combustible or flammable material connected with the fire. The convicted arsonist registration is not typically a lifetime requirement.

If you are convicted of violating California Penal Code Section 452, a misdemeanor offense, you could face up to 6 months in a county jail, and a fine up to $1,000. However, reckless arson is a “wobbler,” meaning the prosecutor can charge the case as either a misdemeanor or felony crime.

You could also face enhanced penalties for an aggravated arson case, which could add up to an additional 5 years in a California state prison.

This would apply if you had a prior felony conviction for malicious or reckless arson under either Penal Code Section 451 or 452, and if a firefighter, police officer, or any other emergency personnel suffered a great bodily injury.

It would also apply if more than one person was injured, caused several structures to burn, or you used any type of device accelerate the fire. Call a Los Angeles criminal defense attorney at our law office for more detailed information.

There are several related criminal offenses that may be filed in addition to arson charges. The most common is insurance fraud. This occurs when you set the fire with the specific intent to commit fraud.

For example, you intentionally set a fire to your own house or vehicle to collect insurance money. If you set a fire that killed someone, you could be charged with first-degree murder, under California Penal Code Section 187.

If you entered a building with the intent of committing a felony, you could be charge with burglary, under California Penal Code Section 459.

If you entered another individual's property without permission, you could also face trespassing charges, under California Penal Code Section 602.

There are a variety of legal defenses our Los Angeles criminal defense lawyers may use against arson charges. As you can see above, an arson conviction can carry harsh legal penalties.

Therefore, it's critical to retain a skilled criminal attorney who understands the best legal strategies and who will aggressively fight to have your charges reduced or dismissed. Some of the potential legal defenses include:

Mistaken Identity – Typically, arson cases are aggressively investigated and police are under intense public pressure to solve the case. Therefore, an investigation can be rushed in an effort to make an arrest.

Witness statements and video from a nearby camera could show you were not the suspect. In fact, in some cases, our lawyers may be able to prove you were no where near the scene when the fire began.

Insufficient Evidence - Many arson cases are built with only on circumstantial evidence, with no witnesses. This means the physical evidence does not show you started a fire. This could make the prosecutor's case very difficult to prove. Our criminal lawyer may be able to create reasonable doubt that you are guilty, and should not be convicted of arson.

Accidental Fire – In order to be convicted of arson, the prosecutor has to be able to prove you acted maliciously, or recklessly in starting the fire. In some cases, our criminal attorneys may be able to prove the fire was the result of an accident. We could make an argument that in spite of the fact property was burned; it was completely unintended, and not a criminal act.

False Accusation – In some arson cases, there are a wide variety of reasons why someone may falsely accuse you of arson. Maybe the person who actually started is accusing you in an attempt to avoid prosecution themselves. Maybe you were falsely accused out of an act of revenge.

If you have been accused of malicious or reckless arson, you will need a highly experienced Los Angeles criminal defense lawyer at Eisner Gorin LLP to review the facts and circumstances of your case.

Remain silent. Do not make any statements to arson investigators or law enforcement. Arson is a criminal offense which typically requires a complex technical investigation.

In California, there are fire investigators and specialized units who use forensic evidence in their arson investigation. Even though these individuals are highly trained on determining how the fire was started and its point of origin, they don't always get it right.

Our criminal defense law firm understands how to effectively cross-examine the prosecution's expert witnesses, and to challenge their conclusion the fire was a result of arson.

We need to first closely examine the details of your case to start preparing a solid defense strategy. Our lawyers offer a free immediate response. Call our law office at 877-781-1570.