Felon in Possession of a Firearm Laws in California - PC 29800 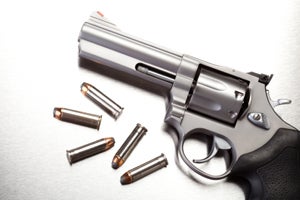 Penal Code 29800 PC makes it a crime for anyone with a felony conviction to own, possess, or even have care or custody of a firearm.

Have you been accused of being a felon in possession of a firearm in Los Angeles County? The Second Amendment of the United States Constitution provides citizens a legal right to bear arms. However, there are several ways someone can forfeit their gun ownership rights.

Under California Penal Code Section 29800, it is illegal for anyone who was previously been convicted of a felony, certain misdemeanor offenses, or a habitual drug user, to own, possess, or even have care or custody of a firearm.

It's critical to make note here that you don't have to be in actual physical possession, such as holding the firearm, to be convicted.

California law only requires that you have access to the firearm or have the right to control it.

Over our decades of criminal law practice in Los Angeles, we have received numerous questions about California's felon with a firearm law because 29800 PC contains exceptions and often confusing technical language.

One of the most common questions involves a situation where a felon's spouse legally owns a firearm and stores it in their home. Under Penal Code 29800, it's a crime for you to have access to a firearm. Depending on the specific circumstances and your ability to access the weapon, she might be able to keep the gun.

However, in this type of situation, it's better to play it safe and consult with a criminal defense lawyer to review the fine details. Another common example includes a situation where a felon's roommate has a firearm in the home without their knowledge.

During a routine search by felon's parole officer, the firearm is found. In this type of situation, since the felon did not knowingly possess the firearm, a criminal defense lawyer should be able to successfully avoid a conviction.

If you have been accused of being a felon in possession of a firearm, it's critically important to consult with a Los Angeles criminal defense attorney at Eisner Gorin LLP immediately. If convicted, the legal consequences can be severe.

If questioned by Los Angeles police detectives, don't make the mistake of providing a statement. Remember, they are not on your side. They are not your friend. They are well paid to build and criminal case against you.

Politely decline to answer any questions and call our law firm right away. Now that we have discussed the basic concepts of felon with a firearm charges, let's examine the legal definition, penalties, and defenses below.

A felon is legally defined an individual who was convicted of a felony offense in any state, or even by any other government or country.

You are also considered a felon if you were convicted under a federal law and the conviction of a similar offense under California law can result in felony punishment or were sentenced to a federal facility for more than 30 days, or received a fine of more that $1,000, or both.

By law, a “habitual drug user” is anyone who is an addict that is physically dependent on a drug. Under California gun laws, a firearm is any device designed to be used as a weapon where a projectile can be expelled through the barrel by the force of an explosion.

This includes revolvers, pistols, rifles, and shotguns. It's important to make note that if a device qualifies as a firearm, it does not matter if it was loaded at the time of the offense.

In order to be convicted, the Los Angeles County prosecutor has to be able to prove, beyond any reasonable doubt, certain elements of the crime. These elements include:

As stated above, it's critical to make note again you don't have to be in actual possession of a firearm to be convicted of violating California Penal Code Section 29800. Just having access or control of a firearm could result in a conviction. See our blogs:

Consult with a Los Angeles criminal defense attorney at our law firm for more information.

Legal Penalties for Felon in Possession of a Firearm

If convicted of felon with a firearm, the legal penalties can be harsh. Felon in possession of a firearm is felony offense that can't be reduced to a misdemeanor.

The legal penalties include up to three years in county jail, a fine up to $10,000, or both a county jail sentence and a fine. See related: Grand Theft Firearm. You may also be required to forfeit the firearm. If you are not a legal immigrant, a conviction could lead to deportation.

Legal Defenses Against Felon with a Firearm Charges

An experienced Los Angeles criminal defense lawyer at our law firm can use a variety of legal defenses on your behalf against charges of felon in possession of a firearm. The defenses include:

If you or a family member has been accused of felon in possession of a firearm, you should call a Los Angeles criminal defense attorney at Eisner Gorin LLP as soon as possible.

We will need to thoroughly review to specific details and circumstances of you case in order to develop an effective defense strategy.

We understand the severe legal consequences of a conviction and can assist you in obtaining the best possible outcome. Our lawyers will provide a free immediate response.