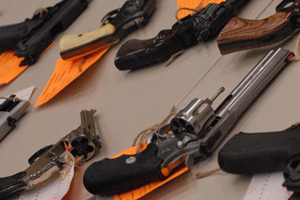 You can be charged with a felony or misdemeanor for your weapons charges depending on type of firearm involved, intent, and prior criminal record.

Despite the fact that California has some of the most extensive gun laws in the United States, many Los Angeles County citizens are allowed to legally possess a firearm.

A conviction for a a violent crime weapons offense can have far-reaching consequences, resulting in serious loss of freedoms. There are many types of charges you could face that include the use of a weapon, these include:

You could be charged with a felony or a misdemeanor for your weapons charges in Los Angeles County, depending on the type of firearm involved, your intent, and whether you have a prior criminal history.

There are also any number of sentencing enhancements which could apply.

If you have been accused of any type of firearms case, consult with a Los Angeles weapons charges attorney at our law firm to thoroughly review the details of your case in order to determine an effective defense strategy.

See related: Gun Rights at Airport and Assault with a Firearm.

If your weapons offense is charged as a misdemeanor in Los Angeles County, you could receive a sentence of:

If your weapons offense is charged as a felony case, you could receive a sentence of:

The determination of sentence length will depend on the activity, the type of weapons offense, and whether you have a prior criminal record, particularly a weapons conviction.

Keep in mind, that sentence enhancements can add years to your sentence. California has a law which says “use a gun and you're done.”

Under this law, there is a list of nineteen serious felony offenses, including murder and sex crimes, which can add a significant number of years to your sentence.

As an example, if you committed murder using a weapon, you could receive an additional 25 years to life in addition to your original sentence.

Because there are many nuances associated with LA County weapons charges, it is imperative you have an experienced Los Angeles criminal defense attorney from our law firm by your side from start to finish.

Because a conviction for a weapons charge in Los Angeles can potentially impact the rest of your life, any type of firearms charges must be taken very seriously.

A conviction for a weapons charge will be on your criminal record, visible for any potential employer to see. A criminal record could resurface in many unexpected, adverse ways throughout the remainder of your life.

Background checks are now common for those wanting to rent a home, and you will likely be unable to secure a government student loan or a professional license with a weapons conviction on your record.

There are, however certain legal defenses which may be used by an experienced Los Angeles weapons charges lawyer for those charged with a a firearm violation.

Of course, your defense will depend on the circumstances surrounding your charges, but some of the more typical defenses include:

The laws for weapons offenses in Los Angeles County are quite extensive. If you have been charged with a firearms offense you must speak to an experienced Los Angeles criminal defense lawyer at Eisner Gorin LLP as soon as possible.

Don't make any statements to police. Talk to us first. Our weapons charges lawyers know the best way to defend your charges, with a goal of the lightest sentence possible, or even a dismissal of the charges entirely.

Our Los Angeles criminal defense law firm has a history of success defending clients against any type of weapons charges.

For example, In Los Angeles Superior Court, we earned a great victory for the Fourth Amendment after a Judge held that police officers had no legal justification to enter our client's car to search for the registration after the vehicle stop.

Therefore, the court granted our motion to suppress a firearm recovered inside the car, and the prosecution dismissed the case.

If you or a family member have been accused of a weapons case, call our law office at 877-781-1570 to to begin building a solid defense against these serious charges.