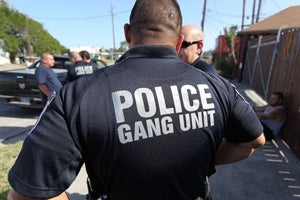 Under PC 186.22, anyone willfully participates in gang activities, or joins with other members in a crime, could be guilty of violating gang enhancement laws.

Under California Penal Code Section 186.22, any person who willfully participates in gang activities or joins with other members of a gang while carrying out a crime could be found guilty of violating gang enhancement laws.

Basically, a criminal street gang is any group of 3 or more people who have a common name that participate in a pattern of committing a variety of California criminal offenses.

Penal Code 186.22 was enacted back in 1988 by California lawmakers in response to rising gang violence. It's officially called the Street Terrorism Enforcement and Prevention Act (STEP), but more commonly known as California's street gang enhancement law.

It provides Los Angeles County prosecutors a sentencing enhancement when they can prove your underlying criminal activity was part of street gang participation.

They would have to prove, beyond any reasonable doubt, you actively participated in a criminal street gang, knew members take part in a pattern of gang crimes, and you willfully assisted with their criminal acts.

One of the key factors here is the question of “active participation.” What exactly does that mean? In basic terms, it means taking part in more than a simple passive manner, or in name only. This means you could be considered actively participating if you took part in the criminal acts just some of the time, even though you were not the leader.

In fact, you don't even have to be an active gang member. A common example in Los Angeles County includes a situation where police arrest someone for a felony robbery offense. One of the police officers recognizes them from previous incidents with known gang members.

The suspect tells the officer he is not an active gang, but has sometimes hung out with them. The robbery offense he was just arrested for has some similarities to prior robbery offenses that were committed by the criminal street gang he hangs out with.

Since he admitted to hanging out with the gang, and there are similar patterns between his robbery arrest and the street gang, he can be considered to be actively participating in that gang. See related: California's Drive-By Shooting Laws.

If you have been arrested and the prosecutor files for a gang enhancement, you need to immediately contact a Los Angeles criminal defense lawyer at Eisner Gorin LLP. Our attorneys will closely examine the facts and circumstances of your case and provide an aggressive defense against any enhancements and your underlying criminal offense.

Our law firm has a track record of success defending clients against gang related charges. For example, in San Fernando Superior Court, our client was a driver in two separate gang-related homicides and was facing life in prison without parole if convicted.

After we were able to obtain dismissal of one of the murder charges at the preliminary hearing, our firm was able to secure a case settlement to a plea of voluntary manslaughter on the second homicide charge. Our client served all of the custody time in a county jail. To better understand the gang enhancement law, let's examine some legal definitions below.

Under California Penal Code Section 186.22, a criminal street gang is legally defined as any group or organization that has 3 or more people that have a common name or an identifying symbol, and one of their primary activities is to commit one of the listed California criminal offenses, and their members engage in a pattern of criminal gang activity.

Under PC 186.22, the legal definition of a “pattern of criminal activity” means:

What about that specific list of crimes that would establish a pattern of criminal gang activity? It includes robbery, several drug crimes like drug sales, drug transportation, and drug manufacturing.

To prove you "promoted, assisted, or furthered” a felony criminal offense by a gang, the prosecutor has to be able to show you directly committed a felony crime under California law, or at least aided and abetted a felony offense.

To be convicted of participating in a gang, under California penal Code Section 186.22, they must prove you actually committed, or aided and abetted, a felony crime with other members of the gang.

As you can see, this law can be quite complex and confusing. Call a Los Angeles criminal defense attorney at our law firm for more detailed information.

Legal Penalties for Participating in a Gang

Under California Penal Code Section 186.22(a), participating in a gang is a “wobbler,” meaning the Los Angeles County prosecutor can file as a misdemeanor or a felony case.

Under California Penal Code Section 186.22(b), you could receive an enhanced sentence if you are convicted of a California crime, and the prosecutor is able to prove all the elements of the enhancement, which include:

Again, it's important to note that under California law, it is NOT required that you are an active gang member when the crime was committed to receive an enhanced sentence.

How Much Will a Gang Enhancement Increase a Sentence?

The severity of the gang enhancement will depend on the type underlying crime of which you are convicted.  If you are convicted of misdemeanor violation, you could face up to 1 year in county jail, and the law specifies states you must serve at least 180 days in jail, followed by a probation period.

For a felony case, you will receive additional time in a California state prison of 2, 3, or 4 years, if street gang enhancement applies.

For a serious felony case, the additional time in state prison will be 5 years. This includes many types of California crimes, including:

For a violent felony case, the additional time in state prison will be 10 years. This also includes many types of California felony offenses, including:

For other types of felony cases, the additional time in state prison will be 15 years. Again, this includes many types of California felony crimes, including:

Other specific felony cases would result in 7 years to life in a California state prison, including:

If your underlying conviction is a felony case punishable by life in prison, you will be sentenced to a life prison term and will not earn any credits towards your parole eligibility until you have served at least 15 years.

There are other sentencing considerations that could be examined by the court. These includes whether the offense occurred on school grounds or within a certain distance from a school zone.

Legal Defenses Against a Gang Enhancement

A skilled Los Angeles criminal defense lawyer at our law firm can use a variety of legal defenses to challenge gang participation or sentencing enhancements. These include:

There are several other potential legal defenses based on the specific facts and circumstances. In California, gang laws are complex. Our attorneys must first closely examine the fine details in order to prepare a solid defense strategy.

At the Los Angeles criminal defense law firm of Eisner Gorin LLP, we know from experience what exactly a prosecutor has to be able to prove in order seek a California Penal Code Section 186.22 gang sentencing enhancement.

Your first step is to call our office and let our lawyers thoroughly examine you underlying case details so we can determine an effective defense plan.