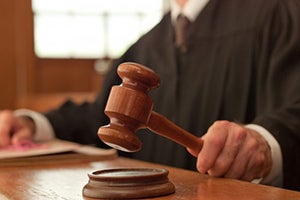 If you're facing a misdemeanor charges and believe the prosecutor lacks sufficient evidence, a Penal Code 991 PC motion to dismiss can be filed.

After you have been charged with a crime in any Los Angeles County Criminal Court – You are entitled to certain legal rights to ensure fair criminal proceedings and to give you an opportunity to defend yourself.

This includes the right to an arraignment in court within a reasonable time period after your initial arrest, which is typically 48 hours.

At your arraignment hearing, the judge will explain the criminal charges that have been filed against you, read your legal rights, set a bail amount, accept your plea, and take any preliminary motions.

If you are facing a misdemeanor case and believe the prosecutor lacks sufficient evidence to support the charges, a Section 991 motion can be filed.

This motion is essentially an early probable cause challenge by asking the court to dismiss the criminal case due to insufficient evidence. Clearly, if the Los Angeles County prosecutor lacks probable cause, they won't be able to establish the burden of proof or obtain a conviction.

Under California law, “misdemeanors” are considered the less serious category of criminal offenses. While there are many differences between misdemeanor and felony prosecutions in Los Angeles County, one of the most important is the procedure by which probable cause is determined.

In almost all felony prosecutions, a preliminary hearing will be held in which a judge makes a determination of probable cause.

However, in the case of a misdemeanor defendant who remains in custody before being brought to court for arraignment, the defendant, or their attorney, can request that the judge make a probable cause determination similar to that which would be made in a felony case at a preliminary hearing.

Keep in mind that this motion, which is brought pursuant to California Penal Code § 991, is only available where the defendant remains in custody.

Therefore, if you or your loved one bails out prior to the first court date in a misdemeanor case, they may not make a Section 991 motion.

As stated, it's important to note again a PC 991 motion is only used if you have been charged with a misdemeanor crime. If you are facing a felony crime, a similar legal action is a Penal Code 995 motion.

California Penal Code § 991, subdivision (a), provides, in relevant part, that:

Such a continuance may be necessary to give the prosecution time to assemble their evidence, speak with the arresting officers, and prepare for the litigated hearing before the Court.

Probable Cause and Setting the Case for Trial

In making the probable cause determination, the Court will rely on documentation such as a warrant affidavit from an investigating police officer, if any, police reports related to the alleged crime, and any other documents “of similar reliability.” (Penal Code § 991(c).)

In a typical misdemeanor arrest, which are not often supported by a sworn warrant affidavit, the evidence will consist simply of a police report.

Penal Code § 991(d) commands the Court to set the matter for trial if the Court determines that probable cause exists to believe that the defendant committed the crime alleged in the complaint.

Probable cause is defined in various ways in case law, but essentially consists of a common-sense determination whether there is reasonable cause to believe that:

This standard is far easier to meet for the Los Angeles County prosecutor than the familiar “proof beyond a reasonable doubt,” standard which applies at a jury trial.

Possible Results of a PC 991 Motion

The Los Angeles County judge will either grant or deny your PC 991 motion. If denied, your criminal case will proceed through the court, but you will still have an opportunity to challenge the evidence later though other legal motions.

If, after the probable cause hearing, the Court finds that there is insufficient evidence to support probable cause, the Court will dismiss the complaint against you and you will be released from custody.

However, this is not necessarily the end of the case. When a misdemeanor complaint is dismissed following a probable cause hearing pursuant to Penal Code § 991, the prosecution has 15 days to refile the complaint re-alleging the same criminal conduct against the defendant. (Penal Code § 991(e).)

If, however, this second filing results again in a dismissal of the complaint, the second dismissal is a permanent bar to any future prosecution based on the same alleged conduct. (Penal Code § 991(e).)

Accordingly, the Los Angeles County prosecutor gets two chances to allege misdemeanor conduct against a particular defendant, but not three.

Consult with our Criminal Law Firm

If you or a member of your family are facing misdemeanor charges and still in custody in Los Angeles County, call our law office to discuss the possibility of filing a Penal Code 991 motion, which is an early challenge to potentially stop your case immediately. In some cases, you may be eligible to file a motion for factual innocence.

If you are charged with a misdemeanor crime and interested in consulting further about the option of filing a Penal Code § 991 motion for a probable cause hearing, contact our experienced criminal defense attorneys.

Criminal matters, even when charged as misdemeanors, are serious legal issues which can result in lasting damage to your reputation and ability to secure employment, housing, and other benefits.

Representation by an experienced advocate is necessary to ensure the best chance of a positive outcome in your case. Contact us to review the details of you case at 877-781-1570.