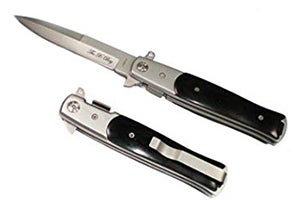 PC 21510 makes it a crime to carry a switchblade, possess one in your vehicle, or offer to sell or loan one to another person.

It's a crime to carry a switchblade, possess one in your vehicle, or offer to sell or loan one to another person.

A switchblade knife is described as a knife that has the appearance of a pocketknife with a blade that has the ability to be automatically released with a flick of a button or pressure on the handle, or even just a flip of the wrist.

This includes any spring-blade knives, gravity knives and butterfly knives. It should be noted a switchblade knife doesn't include the most common type of knife that can open with one hand by putting thumb pressure on a stud that is attached to the knife.

It's important to note that “possession” of a switchblade means you had control over it, meaning it could be in your pocket or jacket, and you knew it was there. You don't have to have intent to use the switchblade as a weapon in order to be found guilty of violating California Penal Code Section 21510.

A common example in Los Angeles County when you can be charged with carrying a switchblade knife includes a situation where you buy a spring loaded knife with a blade of two inches that can be opened by putting pressure on a button. You put the knife in the glove box of your car for storage.

You are stopped by police and arrested for DUI. A subsequent search of your vehicle reveals the knife which is considered in your “possession” due to the fact it's in your glove box. Under this situation, you could be charged with carrying a switchblade in violation of California Penal Code Section 21510.

If you have been accused of carrying or possessing a switchblade knife, you should consult with a Los Angeles criminal defense attorney at Eisner Gorin LLP to review the details and options moving forward. Let's take a closer review of the legal definitions, penalties, and defenses below.

Legal Definition of Carrying a Switchblade

California Penal Code Section 17235  legally describes a "switchblade knife" as a knife with an appearance of a pocketknife with a blade two or more inches that can be released automatically with a flick of a button, pressure on the handle, or just a flip of the wrist.

There are many types of other knives that would qualify a switchblade, such as a:

It should be noted under PC 17235; a switchblade knife doesn't include a knife that can be opened with one hand using thumb pressure on the blade of the knife or a knife that has a thumb stud that is attached to the blade.

This means most common pocket and folding knives are not considered a switchblade knife. If you need more information about the legal definition of carrying a switchable, contact our Los Angeles criminal defense law firm.

As described above, Penal Code Section 21510 makes it unlawful to do any of the following:

It's important to note the driver's area of a vehicle covers not only the open driver and passenger area, but also includes any interior compartments, such as the glove box.

As stated above, carrying a switchblade “on your person” doesn't only include holding it, but also includes any situation where you have control over the switchblade, meaning it can be in your pocket or purse.

In order for the Los Angeles County prosecutor to convict you of carrying a switchblade in violation of California Penal Code Section 21510, they must be able to prove, beyond a reasonable doubt, all the elements of the crime listed below:

Again, the LA County prosecutor has no legal requirement to prove you had any intent to actually use the switchblade knife as a weapon to obtain a conviction. PC 21510 makes it illegal just to knowingly have possession of a switchblade. It simply doesn't matter if you had no intention on using it as weapon.

Legal Penalties for Carrying a Switchblade

If you are convicted of possession of a switchblade knife in violation of California Penal Code Section 21510, you are guilty of a misdemeanor crime that can carry the following legal penalties:

It's important to note that a misdemeanor conviction above will not normally result in jail time, but there are aggravating circumstances where receiving jail time by the judge is much more likely. Aggravating factors include the following situations:

If any of the above aggravating factors can be proven, the judge has wide discretion of sentencing and will typically base their decision on the specific circumstances and facts of the case.

Legal Defense for Carrying a Switchblade

Our Los Angeles criminal defense attorneys could use a wide range of potential legal defenses against your charges of carrying a switchblade knife in violation of California Penal Code Section 21510.

Every case is unique and will require a close review of the details of your case, but some of the most common defenses include the following:

If the knife has any characteristics outside the legal definition, such as a mechanism that gives resistance to opening the knife, then we could show its fails to qualify as a switchblade and you can't be held criminally liable.

You lacked knowledge of its presence: One of the elements of the crime above the Los Angeles County prosecutor has to prove is that you were aware you were carrying a switchblade on your person or vehicle.

If you attorneys can show you didn't know it was in your car or a bag, then we can cast reasonable doubt and possibly avoid a conviction. Remember, the burden of proof is on the prosecutor. We might be able to show evidence the jacket or bag where the switchable was discovered belong to another person.

We could challenge whether the police officer had probable cause to search you or your vehicle. If successful, the switchblade itself could be suppressed as evidence and the prosecutor may have no other choice but to dismiss the charges.

If you have been accused of possession or carrying a switchable in violation of California Penal Code Section 21510, consult with the top-rated Los Angeles criminal defense attorneys at Eisner Gorin LLP.

We have a track record of success defending clients against weapons related offenses and work aggressively to obtain the best possible outcome.