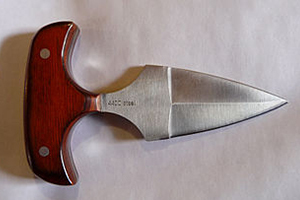 PC 21310 and 16470 makes it a crime in California to carry or concealed dirk or dagger that can used used to cause serious injury to someone.

Carrying a concealed dirk or dagger is covered under California Penal Code Sections 21310 and 16470. In basic terms, it's a crime to carry or possess a concealed straight knife that can be used to stab and cause serious injury to another person.

In Los Angeles County, police and prosecutors consider any weapon possession accusation seriously as they can be used to commit other crimes, such as assault or robbery. PC 21310 is often difficult to prosecute due to issues on whether the dirk or dagger was ready to be used as a stabbing instrument.

It's no secret that knives can be dangerous weapons with the ability to cause significant physical injuries.

Therefore, Penal Code 21310 regulates carrying and possessing dirks or daggers. It's critical to note you are allowed to carry these type knives openly in some type of sheath on your waist, but it's a crime to conceal them on your person.

So, what exactly is considered a dirk or a dagger? In simple terms it's a knife capable of immediately being used as a stabbing weapon to cause serious injury or death.

An example of when someone could be charged with carrying a concealed dirk or dagger includes a situation where they carry a knife with an open locked blade in the pocket of their jacket while walking home.

They are stopped and searched by police and they find the knife with locked extended bladé in your jacket.

Since it's concealed, locked open, and can be used immediately as a dangerous stabling weapon, they could face charges of carrying a concealed dirk or dagger in violation of California Penal Code Section 21310.

If you have been accused of possession of a concealed dirk or dagger, call the Los Angeles criminal defense attorneys at Eisner Gorin LLP. We will review the charges and discuss options on obtaining the best possible outcome on your case. Let's take a more thorough review of the legal definitions, penalties, and defenses below.

Legal Definition of Carrying a Concealed Dirk or Dagger

Clearly, it's important to under the legal definition of a dirk or dagger. Under California Penal Code 16470, a “dirk” and a “dagger” is described as follows:

Under this legal description, concealed pocket knives and other folding knives that have the blade exposed and locked into an open position can be considered a dirk or a dagger.

It's important to note it's unlawful to carry a switchblade knife which is defined under Penal Code 17235.

Other similar knives that are unlawful, but not considered a dirk or dagger, include butterfly knives, gravity knives, ballistic knives, and spring blade knives.

It should be noted the dirk or dagger has to be considered capable or ready of immediate use as a stabbing weapon and have the ability to inflict great bodily injury or death, meaning a significant physical injury. Contact our criminal defense law firm if you need a more information.

Elements of Carrying a Dirk or Dagger Crime

In order for the Los Angeles County prosecutor to convict you of violating California Penal Code Sections 21310, they must be able to prove what is commonly known as the “elements of the crime.”

This means they have the burden to prove, beyond reasonable doubt; you violated each as every element of the offense. Under CALCRIM 2501, has to prove the following:

As you can see from these elements of the crime, it could be difficult for a prosecutor to prove you knew you were carrying a prohibited weapon under certain circumstances.

However, in situations where you were caught carrying a dirk and dagger in your waistband, this would make it much easier to prove you knew. If the dirk or dagger were found in a jacket pocket, this would make the prosecutor's burden to prove more difficult.

It is important to note here you don't have to have intent to use the weapon to be convicted. Just knowingly carrying a concealed dirk or dagger is a crime. Carrying means you had physical possession of the dirk or dagger.

This could include in your pocket or purse and it doesn't matter if it was intended for self-defense. Knowing the dirk or dagger could be used as a stabbing weapon is typically proven by the place and time of possession and any modifications made to the weapon.

Knowingly concealing the dirk or dagger is proven by the location and type of concealment on your person. It's important to note the dirk or dagger must be concealed in other to violate Penal Code Section 21310. If you possess a dirk and dagger suspended from your waist in a sheath, it would not be considered a criminal offense.

Legal Penalties for Carrying a Concealed Dirk or Dagger

Under California Penal Code Section 21310, carrying a concealed dirk or dagger is a “wobbler," meaning the Los Angeles County prosecutor can file the case and either a misdemeanor or felony case.

If you are convicted of a misdemeanor crime, the legal penalties include the following:

If you are convicted of a felony offense of carrying a concealed dirk or dagger, the legal penalties include the following:

It should be noted there are aggravating factors that may lead to addition legal penalties. These factors include your past criminal record including violence, any connection with gangs, whether you had intent to actually use the weapon, and if you didn't cooperate with police officers during your arrest.

You could also face an additional charge under California Penal Code Section 12022, personal use of a deadly weapon, if you actually used the dirk or dagger that was found concealed on your person at the time of your search or arrest. PC 12022 carries a sentence of one year if convicted.

Legal Defenses for Carrying a Concealed Dirk or Dagger

There are a range of legal defenses available our Los Angeles criminal lawyers could use to defend you against charges of carrying a concealed dirk or dagger in violation of California Penal Code Section 21310. The most common defenses include the following:

You didn't know you were carrying a dirk or dagger: In some cases, our lawyers might be able to argue you were not aware you were actually carrying the prohibited weapon. For example, perhaps it was inside a coat pocket, back pack, or gym bag belonging to another person who placed it there.

Dirk or dagger wasn't concealed: As stated above, the dirk or dagger must have been concealed in order to be charged under PC 21310. Perhaps our lawyers could argue the weapon was not substantially concealed and you didn't violate the law. It's not unlawful to carry a dirk or dagger openly in a sheath from your waist. A violation occurs when they are concealed.

Illegal search and seizure: In some cases, our attorneys might be able to make the argument the dirk or dagger that was found concealed was the result of an unlawful search or seizure. For example, perhaps police lacked probable cause to detain or arrest you before they found the weapon.

If our lawyers can prove there was no probable cause to stop or detain and search you, this would make the search illegal and anything discovered subjected to a motion to suppress evidence.

Expungement or for Penal Code Section 21310

If convicted of carrying a concealed dirk or dagger under PC 21310, you may be able to seek an expungement of your record pursuant California Penal Code Section 1203.4.

Contact our law firm for more information. If convicted of carrying a concealed dirk or dagger as a felony crime, you may be eligible to seek a reduction of your felony case to a misdemeanor under California Penal Code Section 17(b), because it's a “wobbler” offense.

If you have accused of carrying a concealed dirk or dagger, you need to contact the Los Angeles criminal defense attorneys at Eisner Gorin LLP. A conviction carries harsh legal consequences.

Related Resources: Constitutional Rights and Carrying a Dirk or Dagger