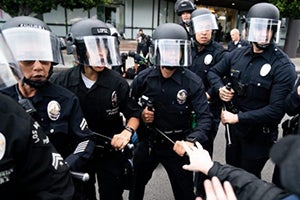 The death of George Floyd and the subsequent protesting and civil unrest have raised numerous questions about the role and conduct of law enforcement, the need for and possibility of systemic change in the criminal justice system, and longstanding issues of race relations in the United States.

Additionally, the civil rights law community is grappling with the effect of qualified immunity, a doctrine which in some observers' opinions has shielded many police officers and municipalities from civil liability for objectively unreasonable acts which would otherwise be compensable under Title 42, Section 1983 of the United States Code.

For the state prosecutorial agency who was tasked with reviewing the conduct of the officer who killed Floyd, however, a much narrower but nevertheless very nuanced determination had to be made.

What, if any, violations of criminal law should the officer be charged with?  As the prosecution was initiated under state laws of Minnesota, certain jurisdiction-specific considerations were likely very important.

This post examines the options which would have been available to a prosecutor facing the same factual scenario had it occurred in California. Our Los Angeles criminal defense lawyers are providing a detailed review below.

Manslaughter vs. Murder Charges in California

For the purposes of this discussion, there is no dispute that the victim died as a result of the officer's actions and that the force used by the officer.

In this case sitting with a knee on the victim's neck for an extended period of time - was objectively unnecessary for the officer to defend himself, someone else, or to stop the victim from fleeing.

The question, therefore, is what factors would affect which of the several manslaughter and murder statutes are charged in criminal court by the prosecutor.

In making this determination, the prosecutor must consider not only which crimes could arguably apply, but also which crimes based on the evidence are likely to be proven to an eventual jury at trial beyond a reasonable doubt, the highest standard of proof in the law.

The prosecutor might first consider the most serious possible charge, first-degree murder (CALCRIM 521) that is defined under California Penal Code 187.

To prove a first-degree murder (CALCRIM 520), the government would have to establish that the officer either killed the victim with premeditation, or that he killed him during the commission of another inherently dangerous felony, the so-called “felony murder rule.”

There have been some reports of a pre-existing relationship between the officer and the victim. However, there does not appear to be any compelling evidence that the murder was pre-planned, or that the officer was in the process of committing a dangerous felony when he happened to encounter the victim.

The prosecutor would likely decide against filing a first-degree murder charge for these reasons.

The next most serious potential charge would be second-degree murder (CALCRIM 541A). Under this theory, the prosecution would need to show that:

The officer acted with deliberate indifference to the value of human life, meaning that his actions were so reckless and so likely to result in the victim's death that any reasonable person would have known or should have known that the victim would be killed.

In this case, the officer placed a knee on the victim's neck for an extended period of time during which bystanders were yelling that the victim appeared unresponsive and during which the victim himself stated that he could not breathe.

Accordingly, a second-degree murder charge is arguably provable against the officer and, indeed, was the ultimate charge selected by the prosecution in the Floyd case.

Moving further down the spectrum of seriousness, the prosecution could have charged voluntary manslaughter that is defined under California Penal Code 192(a).

Voluntary manslaughter is sometimes charged directly, though it is most commonly a lesser-included offense to first or second-degree murder which the defense can establish through affirmative evidence.

A defendant commits voluntary manslaughter (CALCRIM 570) when they kill another person either in the heat of passion, i.e. during a sudden and unplanned fight, or when the defendant unreasonably believes that they must use deadly force to protect themselves or a third-party.

Here, there is no evidence that the officer was suddenly driven to attack the victim based on the heat of passion and, in any event, that passion would certainly have dissipated during the multiple minutes of the physical contact.

There is likewise no evidence that the officer believed he was engaged in reasonable self-defense. Rather, he was attempting to affect an arrest and using unreasonable force to do so. For these reasons, a charge of voluntary manslaughter would likely understate the culpability of the officer in the Floyd case.

As stated above, the prosecutorial agency in the Floyd case ultimately charged the officer who killed Floyd with second-degree murder, and charged the other officers involved as accessories.

Due to the high-profile nature of the killing and the resulting protests and political fallout, we would expect the prosecution of the officers involved, particularly should it reach a jury trial, to be closely watched both by the legal community and the public at large.

Law enforcement officers in Los Angeles County and throughout the state of California often face misconduct allegations and it's common for police officers to become involved with criminal, internal affairs, or civil investigations.

Law enforcement officers are a frequently a target of unfounded allegations that are damaging to their reputation and career. Criminal misconduct can result in a police officer becoming a defendant.

Police officers are often forced to make split-second decisions in a chaotic situation. While the police officer might believe their actions were reasonable and within police department guidelines, some people and the media will closely scrutinize every single detail in an effort expose alleged misconduct.

If you are a law enforcement officer and the target of a misconduct or criminal investigation, you need to retain an experienced criminal lawyer as soon as possible. Our law firm will take a proactive approach to protect your legal rights and career.