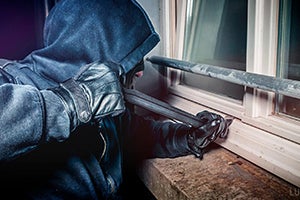 Two men pleaded guilty to home invasion robbery in Seal Beach after admitting charges of robbery, burglary, and dissuading a witness by force.

Two Costa Mesa, California men have pleaded guilty to a home invasion robbery that occurred in in Seal Beach back in August 2017.

Richard Derderian, 35, and co-defendant Aaron Lipsey, 36, entered a plea of guilty to the felony crimes of robbery, burglary, dissuading a witness by force, criminal threats, possession of a firearm by a felon, and a misdemeanor charge of possession of a controlled substance.

They both also admitted to a sentencing enhancement for damaging property that exceeded $200,000 and committing a crime while out on bail on separate case.

Derderian received a sentence of 13 years in a California state prison. Lipsey has been scheduled for sentencing in October 2019, in the Central Justice Center in Santa Ana, California, located in Orange County.

The defendants broke into a Seal Beach home and tied up several men who were inside before they ransacked the home and stole a safe.

What is a Home Invasion in California?

In California, a home invasion crime is commonly known as a residential burglary, which is described under California Penal Code 459.

Burglary occurs when someone enters an inhabited dwelling with an intent to commit a theft or felony inside. Home invasion is typically a burglary that is committed while occupants of a home are present.

In other words, if you break into a dwelling with the intent to commit a felony, or assault in the dwelling with other occupiers at home, you are guilty of a home invasion.

If at any time a person enters a dwelling armed with a dangerous weapon or someone else is present inside the dwelling, then you will be charged with first degree home invasion.

In order to be convicted of first-degree burglary, the prosecutor has the burden to prove all the elements of the crime beyond any reasonable doubt. These elements include:

Let's take a closer look at these critical PC 459 first-degree burglary elements of the crime below.

What is Intent to Commit a Theft of Felony?

Your specific intent at the very moment you entered the home is critical to your case. In fact, you can't be convicted of a home invasion crime if you didn't have an intent to commit a theft or felony once inside the home.

For example, there are actually a few documented cases where an intoxicated person entered someone's home with occupants present by mistake, but they didn't have any intent to commit a crime after they were inside.

In this scenario, this person who entered could face other charges, but they would not be convicted of home invasion because they lacked criminal intent.

If they enter a dwelling with intent to commit a misdemeanor, and enters without permission and commits a misdemeanor, they are guilty of third degree home invasion.

What Are the Penalties for Home Invasion?

In California, a home invasion burglary is always a felony crime. If you have been convicted of home invasion in violation of Penal Code 459, the criminal penalties include:

It's important to note that the penalties you might receive on you case will depend on the facts and circumstances of your home invasion crime. The specific factors that will be considered by the court include the following:

It should be noted you could face additional criminal charges if you were successful in committing a theft or felony after your entered the home. Closely related California offenses for home invasion under Penal Code 459 include the following:

If convicted of a felony offense, you will be subjected to a strike under California's Three Strikes Law. If you are convicted of a felony crime in California, you will have a permanent criminal record that carries adverse life-time collateral consequences. These include the loss of your right to own or possess a firearm, loss of a professional license, and difficulty in renting or buying a home.

At the Los Angeles criminal defense law firm of Eisner Gorin LLP, our attorneys are former prosecutors and understand that it can be difficult for the Los Angeles District Attorney's Office to prove all the elements of the crime in a home invasion case.

As stated above, intent is the key and the prosecutor assigned to your case has to be able to collect evidence that proves you had an intent to enter a home to commit a crime. In some cases, this crucial element can be difficult to prove.

Our criminal defense lawyers will thoroughly review the details of your home invasion case in order to develop an effective defense strategy to obtain the best possible outcome. Our goal is to have your charges dismissed or reduced to a lesser offense by casting doubt on your guilt.

There are a wide range of potential legal defense we could use on your home invasion case. Perhaps we can make an argument you didn't have the necessary intent to commit a crime after you were inside the home.

Perhaps we could successfully argue you have been falsely accused and wrongfully arrested. Maybe we could even make an argument you are actually a victim of mistaken identity.

If you are under investigation, or already charged with a home invasion in Los Angeles, our law firm will work aggressively to obtain a favorable outcome.

We need to first closely review all the details in order to determine an appropriate legal response. Call us to review your case.