When Does a Theft Crime Become a Felony in California? 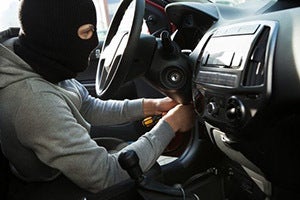 The term “theft crime” actually covers a wide range of offenses that are commonly committed. Depending on the circumstances of your case and what you were charged with, you will be facing either misdemeanor or felony charges.

There are numerous different statutes and definitions in California regarding theft crimes, and the penalties will vary. For example, there are specific definitions that separate petty theft from serious theft crimes or grand theft.

Many theft crimes in California are “wobblers,” that can be filed as either a misdemeanor or a felony depending on the circumstances of the case, and your prior criminal record. As stated, California's criminal law provisions contain numerous statutes which address the category of theft crimes.

In general, theft is the taking of personal property either from another individual, from a company, or from a merchant without permission and with the intent of permanently depriving the victim of the value of the property.

These caveats are important. Borrowing something without permission may be considered theft, but if the defendant can establish a bona fide intent to return the property, they may have a defense.

While self-help is disfavored, if the defendant has a good faith belief that they are the actual owner of property, say in a contract dispute, and takes it away from the alleged victim, the defendant may be able to use the so-called claim of right defense.

Assuming the situation involves a clear case of theft, a question which frequently arises is under what circumstances will the prosecutorial agency file the theft case against the defendant as a California felony as opposed to a misdemeanor.

The general rule is that theft of items with a value over $950 can be treated as a felony where theft under $950 must be filed as a misdemeanor. Even this seemingly clear-cut distinction naturally leads to some follow-up questions.

How do we calculate the loss amount?  In the case of a store, the answer is relatively straightforward. In most cases, the retail price available to the general buying public is the correct measure of value.

In some ultimate sense, the store does not actually lose the retail value of the item as their investment in the item prior to being stolen is substantially less than the retail price.

Still, if the store had been able to sell the item instead of having it stolen by the defendant, it would have stood to gain the amount of the retail price.

Even this seems a bit misleading, as in many cases the store will recover the item in question immediately before the defendant can leave the scene and will likely re-sell the item, albeit at a discount price. Nevertheless, the retail price is almost always used as the measure of the loss amount.

In cases involving theft of items from one individual by another individual outside of the context of a store open to the public, however, calculating loss can become more complicated.

For relatively new items which are commonly available, the loss amount would usually be calculated as the replacement cost, that is the price which the victim would have to pay to replace the stolen item with substantially the same thing.

Other items present more of a challenge to value. How valuable is an antique or a piece of art?  In these cases, testimony by expert witnesses who can appraise the value of the stolen item may be necessary to establish that the $950 threshold for a felony filing has been met.

Other situations can also lead to a felony filing in a theft case. These are cases in which the theft is coupled with some other wrongful act that aggravates the conduct. If the defendant enters a residential property in order to commit the theft, they can also be charged with first degree residential burglary, a felony.

Under California law, a robbery can be charged where a defendant is accused of stealing from a merchant and, in the course of attempting to escape the store, physically resists loss prevention officers or other store personnel.

Even though the defendant did not use physical force against the actual owner of the property they intended to steal, the defendant is still guilty of robbery for having used force to affect an escape.

As stated, each statute listed above have separate definition and penalties and it might be possible to negotiate with the prosecutor for reduced charges or a diversion program in order to avoid a conviction.

Because most theft crimes are wobblers under California law, meaning they can be filed as felonies or misdemeanors in the discretion of the prosecuting agency, a prefiling intervention is crucial after an arrest but before the first court date.

Even if the loss amount can be proven to be over $950, a prosecutor reviewing the case file still has the discretion to treat the case as a misdemeanor.

Experienced defense counsel can present issues of proof and mitigating circumstances concerning the defendant's history and character to attempt to persuade the reviewing filing prosecutor to reduce the charges before court.

If you have been accused of any type of theft crime, contact our experienced Los Angeles criminal defense lawyers to review the details and options moving forward.