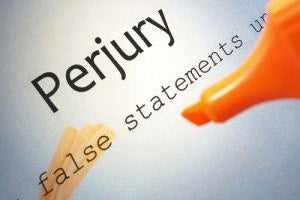 Penal Code 118 perjury is described as lying under oath or knowingly signing a document you know contains false information.

Perjury charges are covered under California Penal Code Section 118. It's basically defined as lying under oath or knowingly signing a document you know contains false information. It is true that perjury charges are rarely prosecuted, but a conviction for perjury can have life-long consequences on your personal or professional life as it considered a crime of moral turpitude. Under California law, perjury is a felony offense that can't be reduced to a misdemeanor crime.

Los Angeles County prosecutors often have a heavy burden to prove all the elements of the crime to obtain a conviction. The main issue in most perjury cases is whether you intentionally made an untruthful statement. If you had just a reasonable belief that your statement under oath was true, then you can't be guilty of perjury.

If you are under criminal investigation or have already been charged with perjury, you need to consult with a Los Angeles criminal defense lawyer at our law firm immediately.

Do not make any statements to police. The more you talk to law enforcement, the more chances you are creating to incriminate yourself. Remain silent. Our defense attorneys will need to closely review all the specific details in order to determine an effective strategy. Let's examine the legal definition below.

A perjury criminal offense is legally defined under California Penal Code Section 118. It criminalizes “perjury,” which is the making of knowingly false statements under oath.  The elements of the crime of perjury are:

Each of these elements requires some further explanation. First, a statement may be made orally or in writing. As such, testimony given in court by a witness and the contents of a signed affidavit are both covered by the prohibition against perjury. Additionally, the statement must have been intended to be communicated to another.

Simply writing a note to yourself, for example, does not qualify as the type of statement covered by Penal Code 118. Some non-verbal conduct may qualify as a “statement” as well. In certain situations, nodding or shaking your head may constitute a statement if the action was calculated to convey a message to another person. It's also a similar crime to offer or prepare false evidence.

Second, the statement made must be knowingly false. If you make a statement which is factually incorrect, but which you honestly believed was true, you cannot be convicted of perjury. Compare this scenario to one in which a person does not know if a certain fact is true or not but conveys to others that they do, in fact, know it is true. If the statement, made in knowing ignorance, turns out to be false, the speaker may be charged with perjury.

Third, the statement must be made under oath. This obviously applies to live court testimony in which the witness is required to take an oath to tell the truth on the record. Other situations also qualify as being under oath, however. Certain affidavits, declarations, and other documents are executed “under penalty of perjury.”

This is the signal to the writer that the contents of the document are being attested to under oath. While this most often applies to court filings and other legal documents, certain private documents such as housing or employment applications are also frequently executed under penalty of perjury. Knowingly filling out false information on these types of applications and submitting them will constitute perjury.

Finally, the statement must relate to a material fact. A material fact is one which affects, or has a reasonable probability of affecting, the outcome of the particular matter at hand. Some knowingly false statements concern matters which are so tangential or unrelated to the overall thrust of the proceeding that they cannot form the basis for a perjury conviction.

For example, during a court hearing, the witness might be asked to spell their name. Suppose the witness intentionally misspells it. This would be a knowingly false statement made under oath. However, the correct spelling of the witness' name is so immaterial to the issue being decided in the hearing that it will not give rise to perjury charges.

If you are convicted of perjury, you can face sentencing of up to 4 years in a California state prison. If the court grants probation, it will typically include 3 years of supervised probation, counseling, community service, and court fines. Speak with a Los Angeles criminal defense attorney at our law firm for more detailed information.

An experienced criminal defense lawyer can attack a perjury charge with both legal and factual defenses. One defense might address the truth of the statement itself. It may be possible to show that the statement was, in fact, true. In the more common cases, the statement will be provably false. The defense must therefore focus on the defendant's mental state. If you were merely mistaken, then you could not knowingly make a false statement. This defense is commonly referred to as “mistake-of-fact.”

Your criminal defense attorney may also argue that the statement was not related to a material issue. In a case where the statement you made was provably false and there is strong evidence that you knew it was false when you made it, you may still avoid conviction by arguing that it concerned an immaterial or tangential issue, and therefore had no likelihood of affecting the outcome of the proceeding.

Every criminal case is fact-specific. Advocating for the best possible resolution to your case requires careful examination of the unique circumstances that led to you being charged. If you have been accused perjury, don't put your reputation, career, or even your freedom in jeopardy.

Our experienced Los Angeles criminal defense attorneys have an outstanding track record of success. Our law firm offers a free immediate response to help you assess your situation, and determine what the best approach is to defending your case. It's important to remain silent and not make any statements to law enforcement. If you or a member of your family has been charged with perjury, contact our law firm at 877-781-1570.