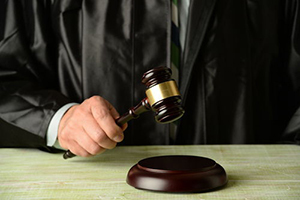 In California criminal cases, the first court appearance is the "arraignment" where you will told of the charges and asked to enter a plea.

In a criminal case, the first court appearance by the defendant in a California is almost always an arraignment. Several important steps will be taken at the arraignment of which the defendant should be aware. Basically, it's the first stage of court proceedings and the defendant's first appearance in front of a judge where they are informed of the criminal charges against them and asked to enter a plea.

Defendants and their criminal defense lawyer are given a copy of the criminal complaint and police reports and then the critical issue of bail can be argued before the judge. If the defendant doesn't enter a plea of “no contest” or “guilty,” then the judge will schedule a future court date. If defendant is charged with a misdemeanor crime, the judge will set a pretrial date. For a felony offense, the case can be set for a preliminary hearing or sent to an early disposition court in an attempt to resolve the case. One of the purposes of a preliminary hearing is for the prosecutor to show the judge there is at least some evidence of your guilt.

For a felony offense, there are actually two different arraignments that might occur. The first after charges have been filed, and the second would occur after the preliminary hearing if defendant is held to answer to the criminal charges. When anyone is arrested for a crime, they can't be held in custody for longer than 48 hours without going to court, but this does not include weekends or holidays.

After someone is arrested, they might be released by the police and provided with a future court date or they could post bail. Likewise, after bond has been posted, they will be given a future court date to appear. On a felony case, the defendant must appear personally for the arraignment. On a misdemeanor case, they are typically allowed to have an attorney appear on their behalf as described under California Penal Code Section 977(a). The exception to this rule includes domestic violence charges, among others. Let's take a deeper look below at this first stage the criminal case process and the importance of the arraignment in California criminal cases.

Importance of an Arraignment

This post will detail some of these steps and provide an overview of the importance of the arraignment. As always, however, specific legal questions are best addressed between the defendant and their California criminal defense attorney who will be familiar with the specific facts and circumstances of the defendant's case.

In most cases, especially when the defendant is represented by an attorney, the defendant will waive formal reading of these items to speed the process along as the attorney will have informed the defendant of all this information prior to the arraignment.

Entering a Not Guilty plea at arraignment is often a prerequisite to receiving additional discovery beyond the initial police reports provided by the prosecution at the arraignment as many prosecutor's offices will not process discovery requests until after arraignment.

The defendant also has the option of pleading Guilty to the charges at arraignment. This is advantageous only when the government has offered an “arraignment-only” plea deal which is so favorable that the defendant will wish to take advantage of it and forego the opportunity for additional discovery and to litigate the case.

Often, these offers are made at the arraignment such that the defendant will ask the court's permission to continue the arraignment date one time to think about the offer, in consultation with his or her attorney, before making a decision. Many criminal courts will honor such a request, though the judge has discretion not to allow a continuance of the arraignment.

The third option is to Demur to the charging document. A demurrer, which must be made in writing, is a legal statement by the defendant that, even taking the allegations in the complaint as true, the defendant can not properly be convicted of the offense charged by the government.

A demurrer is most often based on jurisdictional or constitutional issues with the charging document or on deficiencies in the charging document itself. For instance, the conduct alleged might have occurred in a different county or State such that the prosecuting agency has no authority to hold the defendant to answer for the alleged conduct. We can help you decide whether to accept a plea bargain in your case.

In a recent case, our firm litigated a demurrer based on federal/State preemption doctrine which, at the most basic level, states that only the federal government can prosecute certain offenses. In that case, the argument was that the State agency charging the defendant was prohibited by federal law from doing so and only the United States Attorney's Office could properly have initiated the prosecution.

Other challenges, such as First Amendment free speech challenges to the statute under which the defendant is charged are also properly addressed in a demurrer. Because of the time required to prepare the written submission, a request to continue the arraignment to allow counsel to prepare a demurrer is also frequently requested.

Finally, arraignment is often the first time at which bail is addressed by the court. Either the prosecution or the defense can request a change in the defendant's bail status, whether it be an increase or decrease in cash bail or a request to release the defendant on their own recognizance, at the arraignment. At the arraignment, the prosecutor could request that bail or conditions of O.R. be set, even if the defendant has already posted bond. The prosecution could decide to file additional charges and might later request a higher bail that was already posted.

In certain cases, the prosecutor might request a hold pursuant to California Penal Code Section 1275.1, commonly known as a “1275 hold.” Under this law, if probable cause exists to show the bail money posted was obtained from defendant's criminal behavior, they will not be allowed to use those funds for bail.

Any funds that were posted for bail have to first be evaluated at a hearing in order to determine whether the funds posted by defendant came from legitimate sources. A 1275 hold are commonly used when a defendant is charged with crimes such as embezzlement, extortion, drug sales, grand theft, and white collar crimes. The court may either rule on the bail issue at the arraignment itself, or schedule a bail review hearing within a short time after the arraignment in the case of defendants who are in custody at arraignment.

In sum, arraignment is the beginning of the criminal court process and can be an important date in the case of demurrers or requests to change bail. Defendants may also wish to take advantage of very favorable “arraignment-only” plea offers, particularly in misdemeanor cases.

If you or a family member has an arraignment hearing, it's very important to consult with our Los Angeles criminal defense lawyers. We have decades of experience in criminal law and can help you navigate the often complicated court process in criminal cases in California.