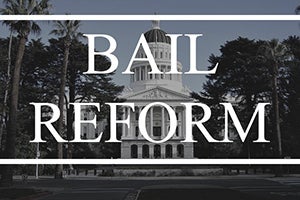 Under Senate Bill 10, California will end the cash bail system which is known as the "Money Bail Reform Act."

In a sweeping reform, California will end the cash bail system. Instead of making a defendant pay to secure a release before trail, their release from custody will depend on a court assessment of their risk to public safety.

This would make California the first state to eliminate a money bail system and it's known as the “California Money Bail Reform Act” or Senate Bill 10.

It was signed by Governor Jerry Brown in August 2018 and will become effective in October 2019. In basic terms, bail is type of punishment against a defendant before they have ever been convicted of a crime.

Under California's currently used bail system, a court will determine whether or not bail is appropriate and the specific amount.

This money bail system has long been criticized based on inequality as defendant's who can afford bail are quickly released, but those who can't afford bail will sit in jail. Essentially, critics claim the wealthy have been able to purchase their freedom regardless of their risk to the public, while the poor who pose no public safety risk remain in custody.

The new system completely eliminates money bail. Now, a Los Angeles County criminal court will determine whether a defendant should be released based on their perceived threat to society. After assessment, a defendant will be classified as low risk, moderate risk, or high risk.

Clearly, those defendants who have been classified as low or moderate risk have a better chance of release. Any defendant who is classified as high risk or arrested for a violent felony crime will not be released.

If you have been arrested and charged with a crime, contact the Los Angeles criminal defense attorneys at Eisner Gorin LLP to review the details of your case. Let's take a closer look below on how and why California decided to abandon their money bail system and the new bail law.

California Court of Appeals – Case of In re Humphrey

In its recent decision in the case of In re Humphrey, the California Court of Appeals condemned what it termed “preventive detention,” meaning the practice of setting a practically unattainable bail amount for a defendant who had not yet been convicted of a crime.

By setting a cash bail in an amount which is simply unfeasible for almost any criminal defendant to post, courts guarantee that a defendant remains incarcerated pending trial.

Critics of this system of cash bail have argued for years that the cash bail system is rife with abuses such as those identified in Humphrey and, whether intended or not, create a two-tiered system in which wealthy defendants fight their cases from outside custody where poor defendants facing the same charges await trial in county jail.

Besides the obvious inconvenience and stress caused by incarceration, defendants who remain in custody pretrial are far more likely to accept a plea bargain, potentially not in their best interests, simply to obtain a quicker release.

Faced with mounting criticism of the current bail regime, State legislators passed SB 10, Hertzberg, a massive overhaul to the California pretrial bail system which goes into effect in October 2019. Governor Brown signed the bill into law in August 2018.

The most obvious change in the law created by SB 10 is the complete elimination of the cash bail system. However, the bill does not simply allow every individual charged with a crime to remain free pending trial.

Rather, it replaces cash bail with a risk assessment system largely operated by the pretrial services department. Several critics have forecast that this new system may actually result in more defendants awaiting trial in custody rather than less.

The cornerstone of the new bail system is the pretrial services risk assessment, which places arrested individuals into one of several risk categories. Whether or not an individual is released pretrial, and on what condition or combination of conditions, is based almost entirely on this risk category determination.

For those accused of non-violent, minor misdemeanor offenses, the news is good. Under SB 10, the presumption is that such individuals should be booked and released within 12 hours without being taken into custody or having to post any bail.

The main questions the court will need to answer to determine the most appropriate classification include the following:

Defendants who were arrested for low-level, non-violent crimes and with little criminal history will typically have a much better chance of release.

For many other misdemeanors, much less felonies, however, the story is different. New California Penal Code § 1320.10 includes an extensive list of circumstances under which individuals should not be released prior to arraignment.

Keep in mind that under the current cash bail system, an individual who is able to post bail, typically with the assistance of a bail bondsman, can we released almost immediately after arrest.

Others have the very real possibility of resulting in pretrial detention of individuals who, under the previous system, would have likely bailed out on relatively inexpensive cash bail.

This category includes “[a] person arrested for a violation of any type of restraining order within the past five years.”  (Penal Code § 1320.10(e)(6).)

Also prohibited from pretrial release are those arrested for any misdemeanor domestic violence charge. (Penal Code § 1320.10(e)(3)(A), (B).)

Under the prior system, these arrestees could generally obtain release within 6 to 12 hours of release, depending on the speed of the booking procedure, by posting a bail bond of between $20,000 and $50,000.

Under the new system, they would remain in custody prior to arraignment, where defense counsel and the prosecutor will argue before the judge about whether conditions of release will be adequate to protect public safety and ensure the defendant's appearance in court.

This article is a brief outline of the new bail procedures which will go into effect in October of 2019.  This is a new area of law which is still awaiting final implementation.

If you, or someone you know, has questions or concerns about the changes to the bail system, consider reaching out to our experienced Los Angeles criminal defense attorneys for a consultation.