What's the Differences Between Arrest Warrants and Search Warrants in Los Angeles County? 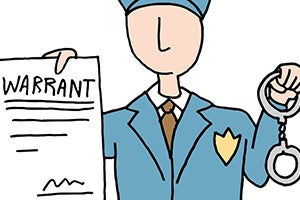 In California, the two types of warrants most frequently encountered by our clients are arrest warrants and search warrants.

Warrants are a commonly used law enforcement tool during the investigation and apprehension of criminal suspects. The two types of warrants most frequently encountered by our clients are arrest warrants and search warrants.

As we often receive inquiries about the scope, validity, and function of these warrants, it is helpful to review the purposes of each and how they are used practically in your criminal defense matter.

Arrest warrants – as the name indicates – are judicially authorized documents permitting law enforcement officers to arrest and detain suspects based on probable cause that the individual has committed a crime.

When a crime is committed in the officer's presence, and the officer therefore has probable cause to believe a crime has occurred, a formal written arrest warrant is unnecessary. Rather, the officer will simply arrest the suspect on the spot.

Arrest warrants enter the picture where crimes are committed outside the officer's presence, such as when a crime is reported by a victim or witness hours, days, or weeks after the fact. Arrest warrants must be judicially authorized.

This means that the law enforcement officer in possession of the information about the alleged crime presents their evidence to a judge to establish probable cause.

This is done in the form of a sworn declaration executed by the officer which lays out the basis for his suspicions that the suspect has committed a given crime.

If the Los Angeles County judge is satisfied that the probable cause standard has been met, they will sign a written arrest warrant which specifies the suspect's name, the crime which they are suspected of having committed, the time of issuance, the county of issuance, and the name of the judicial officer.

It's important to note it's a common myth that police can't enter your home if they only have an arrest warrant. In fact, law enforcement who have lawfully obtained an arrest warrant are legally permitted to enter the home of the person targeted for arrest.

Police could even use force to enter if they have reason to believe that the targeted person is inside the home. However, if they are a guest in another person's home, police aren't allowed to enter to execute the arrest warrant. They must first obtain a search warrant.

Sometimes a warrant will be obtained directly by a Los Angeles District Attorney after the investigating officer has presented the case to the prosecutor's office and the District Attorney has decided to file a formal criminal case.

This is colloquially known as “filing a case with a warrant.” The defendant who has been charged in this way is immediately arrestable. If arrested on the warrant, the defendant will be transferred to court for arraignment within 48 hours if he or she does not bail out.

By far the most rare way that an arrest warrant can be issued is following a grand jury indictment.

Grand juries are panels made up of members of the public who make probable cause determinations after being presented with evidence by a prosecutor.

Their proceedings are secret.  If a grand jury determines that enough evidence exists to charge the defendant, they will issue an indictment.

The judge presiding over the grand jury will then typically issue an arrest warrant to accompany the indictment.

Search warrants  serve a distinct function from arrest warrants. Search warrants provide law enforcement with judicial authorization to search a specific person or place for specific items which, if found and seized, will provide evidence that a crime has occurred. There is also the knock and announce rule.

Based on the provisions of the Fourth Amendment to the United States Constitution, search warrants must state with particularity the person or places to be searched and will be issued only upon an adequate showing of probable cause.

These protections were introduced into the bill of rights by the framers of the Constitution in response to the prior practice of “general warrants,” which allowed authorities to search the persons and residences of colonial citizens virtually at will, without individualized suspicion.

Under the American system, a search warrant must be based on probable cause to believe that a search of the particular person or place will result in relevant evidence being recovered.

It's important to note there is an exception for any items that are in plain view during a search. Any unlawful items that are clearly visible without moving anything can be used against you.

In other words, if the Los Angeles police enter your home with a search warrant authorizing them to look for your brother, who has an active arrest warrant, and they observe a large amount of methamphetamine on the kitchen table, they can lawfully seize it and use against you and your brother even though the warrant specifically limited their search for your brother.

A law enforcement officer, typically a detective, can request a search warrant from the court which is a similar process to request an arrest warrant.

They swear under oath in writing to a judge that they have evidence to believe that a crime has occurred, and that a search of a person or place is required to obtain evidence thereof.

If the Los Angeles County judge reviewing the affidavit is satisfied that the probable cause standard has been met, they will authorize the search by signing the warrant.

First, search warrants typically expire after a specified period of time, meaning law enforcement cannot hold onto the warrant for an extended period of time without executing it.

Second, search warrants (absent specific authorization from the judge) cannot be executed during certain hours, such as the middle of the night, or without “knock and announce.”

However, in cases where there is significant concern about officer safety, a judge may authorize a no-knock, nighttime raid of a residence.

Another issue which our clients frequently encounter with search warrants is sealing. If law enforcement convinces the authorizing judge that facts in the warrant affidavit should remain secret due to articulable concerns for public safety – especially in the case of a cooperator or snitch working with law enforcement – they can order that the warrant affidavit remain under seal.

In these cases, it may be difficult or impossible to challenge the legitimate basis for the search warrant in a suppression motion, as that basis remains unknown to the defendant. With a sealed warrant, the first step is typically to make a motion to unseal the warrant affidavit.

Once the proper motion is brought before the court, the judge will conduct an in camera (meaning a private hearing in the judge's chambers) review of the evidence in the warrant affidavit and will determine if the defendant should be entitled to obtain an unsealed version.

While these motions are typically granted, the judge does have authority to leave the warrant sealed, thereby preventing any meaningful challenge to the warrant.

Search warrants are very frequently the subject of motions to suppress pursuant to California Penal Code § 1538.5. As stated above, a search warrant must be supported by probable cause.

If a judge later determines that the original warrant should not have been authorized, because it was insufficiently supported by evidence, that judge can suppress, meaning to exclude from the criminal case, any evidence obtained during the execution of the search warrant.

Certain exceptions to this suppression rule, such as good faith by law enforcement, also apply. If you or a loved one has been the subject of a search warrant, you should consult with your criminal defense attorney about the process of challenging the warrant and seeking suppression of evidence.

If you or a loved one is under investigation or has been charged with a crime, contact us immediately for a free consultation to discuss your options.