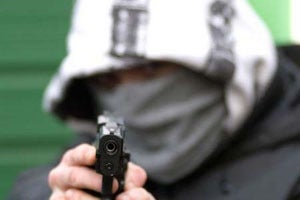 PC 12022.53 imposes additional legal penalties when you commit certain crimes using a gun and provides an "enhancement" to a state prison sentence

The state of California is infamous for having some of the strictest gun laws in the United States. There are some laws that impact your legal right to own or posses a gun, while other specific laws allow for seriously harsh legal penalties for defendant's who commit certain California crimes with a gun.

This 1998 law in commonly known as California's “use a gun and you're done” law, which is defined under California Penal Code Section 12022.53.

In basic terms, this law imposes additional legal penalties when you commit certain crimes using a gun. It provides an "enhancement" to a California state prison sentence for certain serious felony crimes if you use a gun in the commission of the crime.

In other words, it "enhances" California state prison sentences by making them significantly longer. In the past, a defendant who used a gun to in the commission of some crimes were could face mandatory minimum prison terms.

However, in 2017, California lawmakers passed Senate Bill 620, giving the judge the discretion to dismiss a 10-20-life sentence enhancement, if it's "in the interest of justice."

Now, it's judicial discretion instead of a mandatory minimum. It's important to note here that if you use a gun to commit a crime in Los Angeles County, you could still have harsh legal consequences.

Therefore, if you have been accused of using a gun to commit a serious felony crime, you need to consult with a Los Angeles criminal defense lawyer at Eisner Gorin LLP immediately . Let's take a closer look at some legal definitions below.

The gun sentencing enhancement, “use a gun and you're done,” under Penal Code 12022.53 does not apply to all offenses where a gun was used.

In fact, it only applies when you commit specific serious California felony crimes. These include:

As stated above, the gun does not have to be loaded or even operable to be convicted of this sentencing enhancement.

Additionally, you do not need to have fired the gun. Under PC 12022.53, you are considered to have used a gun when you just display it in a menacing manner.

In fact, it's very similar to brandishing a firearm, under California Penal Code Section 417. Finally, this 'use a gun and you're done" sentencing enhancement applies to most attempts to commit the California felony crimes listed above. Call a Los Angeles criminal defense lawyer at our office for more information.

Under California Penal Code Section 12022.53, the “use a gun and you're done” sentencing enhancement, there is a maximum sentence that can be imposed for each type of gun violation. These violations include:

Our Los Angeles criminal defense attorneys can use a variety of legal defenses to California's 10-20-life 'use a gun and you're done'" law. It's important to note the Los Angeles County prosecutor has to be able to prove all the required elements of the crime, beyond a reasonable doubt.

The potential legal defenses include that:

If you or a family member have been charged with a felony crime and accused of using a gun, it's critical to talk to a Los Angeles criminal defense attorney at Eisner Gorin LLP immediately. As stated above, a judge now has the authority to remove the 10-20-Life sentencing enhancement at their discretion.

By retaining an experienced lawyer to handle your legal defense, you will be greatly increasing your chances of avoiding the severe sentencing enhancement and consequences of your initial felony charges.