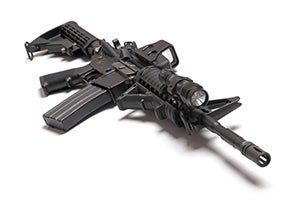 PC 30600 makes it a crime to possess, manufacture, sell, loan, or transfer assault weapons and a .50 Browning Machine Gun rifle.

It should be noted that possession or ownership of these type of weapons are covered under different statutes.

Under PC 30510, there are over 70 firearms made up of various semiautomatic rifles, pistols, and shotguns that are prohibited. California Penal Code 30605 defines the crime of possession of an assault weapon.

So, under California law, what exactly is considered an assault weapon? In general terms, the answer lies on how the weapon is configured.

As assault weapon can have a wide range of characteristics including having the ability for semi-automatic firing, capable of certain attachments such as telescoping stocks, fixed magazines holding more than 10 rounds, and over the length of less than 30 inches.

It's important to note there are exceptions to these assault weapons laws. In other words, there are circumstances where you can lawfully possess an assault weapon and a .50 BMG rifle.

These exceptions include situations where you have:

If you have been accused of unlawfully possessing an assault weapon, you need to consult with the experienced Los Angeles criminal defense lawyers at Eisner Gorin LLP. Let's take a closer review at the legal definitions, penalties, and defenses below.

In order for the Los Angeles County prosecutor to convict you of possessing, selling, or manufacturing an assault weapon, they must be able to prove beyond reasonable doubt all the elements of the crime.

These include the following:

It should be noted that “possession” means you have control or access to the weapon.

In other words, you don't need to physically have the assault on your person to be charged with violating California Penal Code Section 30600, the assault weapons ban.

What is an Assault Weapon?

As stated above, California Penal Code Section 30510 has a list of around 70 types of weapons that have been classified as an assault weapon.

Additionally, California Penal Code Section 30515 has a list of semiautomatic rifles that are considered an assault weapon. This list includes a semiautomatic centerfire fixed magazine rifle that can hold over 10 rounds or has a grenade launcher, flash suppressor, and a forward pistol grip.

It also includes any type of shotgun with a revolving cylinder, among other type of weapons. If you need additional information of what type of firearms could be classified as an assault weapon, contact our Los Angeles criminal defense law firm.

If you are convicted of manufacturing, distributing, transporting, selling an assault weapon or a .50 BMG rifle under California Penal Code Sections 30600, it's a felony offense that carries a four, six, or eight year sentence in a Los Angeles County jail.

In addition, if the transactions listed above involved a minor under 18 years old, you will face additional legal penalties.

If you are convicted of mere possession of an assault weapon under California Penal Code Sections 30605 or 30610, it's known as a “wobbler” offense, meaning the Los Angeles County prosecutor has the discretion to file the case as either a misdemeanor or felony crime.

Their decision of how exactly to file the case will typically depend on the specific facts and circumstances of the case and your prior criminal record.

If you are convicted of a misdemeanor case of possession of an assault weapon, the legal penalties include the following:

If you are convicted of a felony case of possession of an assault weapon, the legal penalties include the following:

It's important to note there are situations where you could just face infraction charges under Penal Code Sections 30605 and 30610. If you are eligible for an infraction charge, you will only face a fine of $500.

This is available for first time convictions and if you had no more than two assault weapons or a 50 BMG rifle, and you meeting the following conditions:

It's very important to note that the legal penalties are for each weapon where there are separate counts. In other words, if you are in possession of 4 assault weapons, you will be charged with 4 separate offenses and face sentencing for 4 crimes, if convicted.

Finally, the possession of an assault weapon while committing another crime will lead to an enhancement of your sentence for the specific crime, such as an armed robbery.

Our Los Angeles criminal defense attorneys could use a wide range of strategies to defend you against charges of violating the assault weapons laws under California Penal Code Section 30600.

Every defense strategy will depend on the specific details of your case, but the most common legal defenses include the following:

You didn't know the weapon was classified as an assault weapon – if you go back to the legal definition and elements of the crime above, the prosecutor has the burden to prove “you knew or should have reasonably known” the weapon has the characteristics of an assault weapon.

In some cases, our criminal attorneys could make an argument you simply didn't know and it's unreasonable for you to have known it was an assault weapon.

For example, perhaps a relative gave you the weapon and you had little or no experience with firearms. In other words, it's not reasonable that you could have known. If we can cast doubt on this important element of the crime, you have a good chance of avoiding a conviction.

If we can show the police lacked probable cause or there was no valid warrant for the search, then any evidence found can't be used against you. It would be a violation of your Fourth Amendment constitutional rights.

In this situation, a motion to suppress evidence could be filed and your case would most likely be dismissed.

A conviction for a violation of an assault weapons law under Penal Code Section 30600 can have life-altering consequences.

Therefore, if you have been accused of any type of assault weapon charges, contact the top-rated Los Angeles criminal defense lawyers at Eisner Gorin LLP.

We will thoroughly review the details to plan a strategy for the best possible outcome on your case.