Were Your Rights Violated During a Traffic Stop? 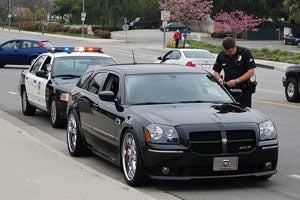 Police officers must have a valid reason to initiate a traffic stop, which is commonly known as "probable cause."

Police can't conduct a traffic stop unless they have probable cause. Quite simply, they must have a valid reason to pull you over or it can be considered an illegal stop.

Common reasons used by police for a traffic stop in a DUI case include lane weaving, speeding, and driving with no headlights.

However, it's not uncommon for a police officer to conduct a traffic stop simply because they think you may be driving under the influence.

For example, a common police tactic is to wait outside a bar and follow certain drivers as they leave.

Next, they will closely scrutinize every action of the vehicle looking for even the slightest reason to pull them over.

Once stopped, you will quickly find yourself taking a breath test and other field sobriety tests.

If police believe you were driving drunk, you will be arrested and charged with DUI. It may be possible for a Los Angeles criminal lawyer to challenge the validity of this type of traffic stop.

If successful, all the evidence obtained after the stop would be thrown out.

Even in cases that are not related to drunk driving, a significant percentage of Los Angeles drivers will be pulled over for a traffic stop at some point in their lives.

Most often, traffic stops result in the driver being issued a warning or a citation due to a driving violation. In some cases, a traffic stop can escalate and create complications for the driver.

Unfortunately, many drivers are unaware of their legal rights during a traffic stop.

A traffic stop does not suspend a driver's rights. As a result, many drivers often unknowingly answer questions and provide information which leads to a lengthier stop.

In many cases, far-reaching and intrusive traffic stops violate a driver's constitutional rights and may even lead to a criminal case.

Fortunately for drivers who find themselves in this situation, in some cases, the fact that their rights were violated can result in the case against them being dropped entirely.

If you believe your rights were violated during a traffic stop, contact our Los Angeles criminal defense law firm to review the specific details and discuss legal options.

The Establishment of Rights

In California, a person's rights while driving are comprised of a combination of state and federal laws and court decisions.

The California state legislature writes bills which, when signed by the Governor, are enacted into law. These laws are enforceable throughout the state and govern driver's rights.

Laws, of course, may be challenged for violating an individual's rights. A court will review these laws and make a determination as to whether or not the law violates any rights.

If the court finds wrongdoing, it may rule that the entire law is improper or it may invalidate certain provisions of the law.

Because of our nation's system of laws, decisions issued by the Supreme Court are considered "law of the land."

Thus, any Supreme Court decisions will impact the rights of everyone living in the United States.

It's important to remember that even a minor traffic violation--for example, failing to use a turn signal--is enough to warrant a traffic stop.

If the police officer asks if you know why you were pulled over, always answer “no.” Don't ever admit knowledge of breaking the law.

2) You have a constitutional right to remain silent. You are not required to answer any questions the officer asks you.

According to a recent Supreme Court ruling, you must invoke your right to remain silent by informing the officer that you are invoking that right.

You cannot be arrested or detained for exercising this right. Obviously, it would be in your best interest to cooperate with the police officer during a routine traffic stop.

This means providing your California drivers license and registration without any resistance.

However, you are under no legal obligation to answer their questions, such as “do you have anything illegal in the car?” or “where are you going?”

Politely decline to answer any questions. Don't be a jerk. Remember, when the police officer is asking questions, they are not attempting to make small talk. They are probing for information.

3) You do not have to consent to a search of your vehicle. Los Angeles police officers will frequently ask a driver who was stopped for a traffic violation if they can search their vehicle. However, without a warrant or probable cause, you do not have to give consent.

Again, it's critical to remember, you are not legally required to consent to a search of your vehicle.

Make sure to vocalize this cleraly and politely. An officer may still search your car, but you may help your cause by vocalizing that you are not consenting to the search. Police don't have to inform you that you have the right to say “no.”

Use common sense. Don't push your cell phone camera in the officer's face and make threats. Getting too aggressive could get you arrested for obstruction of justice.

5) Your detention must be reasonable in length. It's completely legal for a police officer to conduct a traffic stop after an alleged traffic offense, but they can't detain you indefinitely.

How long is too long? There is no set amount of time to be held for a traffic stop. Typically, police need time to check records on your California driver's license and license plate.

If you have been stopped longer than 30 minutes, politely ask the officer why you are still being detained.

6) You can request police officer information. If you have any concern your civil rights may have been violated during the traffic stop, you will need to know the identity of the police officer's involved. You can ask them for their name and badge numbers.

However, you should make this request in a polite and calm manner without antagonizing or threatening to sue them. They have heard all this before.

Remember, it's always wise to pick your battles. You can decline their request, but remain calm and respectful.

If by chance you are arrested after a traffic stop, you may request to park your car safely or have a friend drive it away.

You have a right to have your attorney present during any interrogation. Contact a Los Angeles criminal defense attorney at our law firm for more detailed information about your legal rights during a traffic stop.

Traffic stops are one of the most common ways in which police initiate contact with the public. Many criminal cases arise from traffic stops when officers search the driver's vehicle and find contraband in the vehicle.

Most importantly, police are legally required to have probable cause to search a vehicle. If they do not, any evidence that they gather in the course of the search can often be suppressed, meaning that it cannot be used in court.

Without being able to use evidence found during a search, there is often insufficient evidence to proceed with a criminal case against the driver.

Whether a traffic stop or a subsequent search violated your constitutional rights is a complicated legal matter, and anyone who has been arrested after a traffic stop should have their case reviewed by an experienced Los Angeles criminal defense lawyer at our law firm as soon as possible.

Our attorneys will thoroughly evaluate the facts surrounding your traffic stop and identify any legal violations that may have occurred.

If there were any, our lawyers will file the appropriate paperwork with the court to get the evidence that was gathered during the illegal search suppressed.

You should seek legal counsel if you believe your rights were violated during a traffic stop.

The experienced Los Angeles criminal defense attorneys at Eisner Gorin LLP will review the facts of your case and ensure that you are not prejudiced because your rights were violated.