What is Intimidating a Witness or Victim?

Dissuading or Intimidation of a Witness - Penal Code 136.1 PC

It is a serious offense in California to prevent a witness or victim to a crime from reporting it to authorities or testifying concerning it. Intimidating or dissuading a witness, otherwise known as "witness tampering," may be charged as either a misdemeanor or a felony under Penal Code 136.1 PC. If you're convicted, the penalties could result in between 1 and 4 years behind bars. 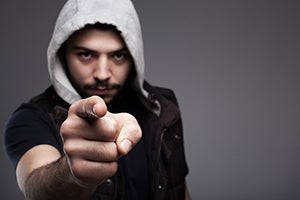 Under PC 136.1, it's a crime to prevent a witness or victim from testifying at a hearing or trial.

Penal Code Section 136.1 PC says that anyone who knowingly and maliciously prevents or dissuades a witness or victim, or attempts, from providing testimony at any proceeding, or making a police report leading to criminal charges, can be charged with dissuading a witness, even if the attempt failed.

Under the law, it makes no difference whether the defendant was successful in their attempt to prevent testimony. In other words, just the attempt is sufficient for a conviction.

Dissuading a witness is frequently associated with domestic violence, such as Penal Code 243(e)(1) domestic battery and Penal Code 273.5 corporal injury to a spouse. Our Los Angeles criminal defense lawyers will review the laws further below.

What Constitutes Intimidating or Dissuading a Witness?

Under California Penal Code Section 136.1 PC, witness intimidation occurs when a person willfully and maliciously tries to prevent or dissuade a witness or victim from doing any of the following:

Under Penal Code 136.1 PC, the prosecutor has to prove several factors known as the “elements of the crime.” These factors are listed under California Criminal Jury Instructions 2622.

As noted, any attempt to dissuade or intimidate a witness is by itself sufficient to secure a conviction under Section 136.1.  In other words, if the defendant is unsuccessful in their attempt to dissuade the witness or victim, they could still be arrested, charged, and convicted of witness intimidation.

What are Examples of Witness Tampering?

The broad language of this crime means that the law applies to a wide range of actions that may attempt to prevent or discourage victims and witnesses from cooperating with authorities. Let's look at some theoretical examples:

EXAMPLE 1: A man sexually assaults a woman then offers her money in exchange for her silence. In this case, the man has attempted to bribe the victim to keep her from reporting the crime and is guilty of dissuading the witness.

EXAMPLE 2: A witness set to testify in a murder trial gets a threatening phone call warning him not to take the stand on pain of injury to himself or his family. The person making the call may be charged with witness tampering and anyone who told the person to make the call.

EXAMPLE 3: A possible witness to a crime receives an email or "snail mail" describing how witnesses to other crimes have been killed or injured. While this may seem a bit less overt, it is still a malicious attempt to silence a witness, and the person sending the communication may be charged.

What is Knowledge and Malice?

The critical differentiator in whether communicating with a witness/victim constitutes dissuading or intimidating that witness is that the person must act "knowingly and with malicious intent."

In other words, they must (a) have full knowledge that their actions are intended to dissuade the witness from doing their lawful duty, and (b) have a specific intent to annoy or threaten injury to the person. The prosecution must prove both of these elements exist to obtain a conviction.

For example, if the person who committed the crime threatens the victim with further pain if they talk, they act knowingly and with malice.

But, if a victim's family member tries to talk the victim out of reporting the crime because they are afraid of retribution, they are not acting maliciously but out of genuine concern and therefore would not be guilty of witness tampering.

What are the Penalties for Penal Code 136.1?

Witness tampering under PC 136.1 is a "wobbler" offense, meaning prosecutors may charge it as a misdemeanor or a felony. For misdemeanors, the penalty for conviction is up to $1000 in fines and up to 1 year in jail.

If convicted of a felony, you could be facing fines up to $10,000 and up to 4 years in prison. The alleged offense's circumstances will determine whether prosecutors charge it a misdemeanor or a felony.

However, witness tampering will always be charged as a felony if it involves violence or threats of violence, if the defendant was hired by someone else to tamper with the witness, or if it's not the first offense of witness tampering.

What Are the Defenses for Intimidating a Witness?

If you were charged with violating PC 136.1, we could use different defense strategies to fight the case, such as lack of intent, no maliciousness, and false accusation.

We might be able to argue that there was no intent to dissuade or prevent a witness or victim from testifying or otherwise aid in criminal prosecution. Witness tampering is a specific intent crime, and it has to be proven they acted with knowledge and malice. 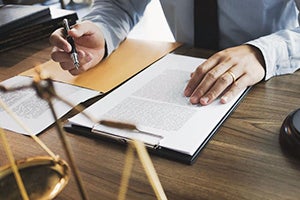 Contact our firm to review the details and legal options.

In some cases, we might be able to show you were falsely accused and wrongfully arrested. In domestic violence-related cases, it's not uncommon for an alleged victim to make false allegations they were abused and intimidated as they are motivated by anger or jealousy.

Through the process of prefiling intervention, it might be possible to drop or reduce charges before the first court appearance through negotiating with law enforcement detectives and the filing prosecutor.

This is commonly known as a “DA reject” and occurs after an arrest but before formal criminal charges are filed.

Eisner Gorin LLP is a Los Angeles-based criminal defense law firm. You can reach us for an initial consultation by calling (310) 328-3776 or filling out our contact form.