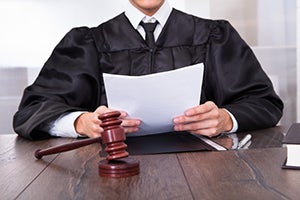 In California criminal cases, if you have been denied a right to a speedy trial, your criminal lawyer can file a "Serna motion" asking the court to dismiss the charges.

Anyone charged with a criminal offense in Los Angeles County has a constitution right to a speedy trial that is guaranteed under federal law and by California's fast and speedy trial law.

The primary purpose of ensuring your right to have a speedy trial is that you might be prejudiced in giving a defense since witness memories generally fade over time or they disappear and evidence can be lost or destroyed.

Typically, any delay in having a trial must be significant and not caused by your conduct, such as leaving the state to escape prosecution or willfully ignoring a court date. In California, you have a right to a trial in misdemeanor cases within 45 days after being criminally charged if you are not in custody, and 30 days if in custody.

If you are charged with a felony crime, you have a right to have a trial within 60 days. If you have been denied a right to a speedy trial, then your criminal lawyer can file a motion during the California pretrial process asking the court to dismiss your charges.

In Los Angeles County criminal courts, this is known as “Serna motion,” which is a motion to dismiss a misdemeanor or felony case due to a speedy trial violation.

These motions are commonly called Serna motions, or “speedy trial motions” after the 1985 California Supreme Court decision in Serna v. Superior Court. In this case, the court in Serna ruled held that an unjustified delay can be a violation of a defendant's Constitutional rights to a speedy trial and that it can provide grounds for dismissal. The right to a speedy trail is an important part of the California criminal court process.

It's important to note that Serna motions are often complex and should be handled by an experienced California criminal defense lawyer. When considering a Serna motion to dismiss for a speedy trial violation, it very important to understand when speedy trial rights begin. Now that we have covered a general overview of speedy trial motion, let's take a closer examination of the legal definitions below.

California Penal Code Section 1382 lays out the legal description of dismissal of the action for want of prosecution. The prosecutor must get a defendant in a felony case to trail within 60 days their arraignment on an indictment, unless there is good cause for a delay.

In other cases, the prosecution will send a defendant a letter about the arraignment date or they will file the case as an arrest warrant which allows law enforcement to arrest and detain the defendant and bring them to court.

If there is an unusual delay in bringing you to trail, a Serna motion can be filed to determine if your rights were violated. After the motion has been filed by your attorney, the judge will hold a hearing where relevant evidence to a speedy trial will be presented. If the court rules in your favor, the criminal charges must be dismissed.

What are the Reasons for a Speedy Trial?

There are many legal justifications for your right to a speedy trial, including the following:

It's important to note a defendant also has the legal right to waive their constitutional rights to a speedy trial at their arraignment. This is a strategic decision that needs to be reviewed by your criminal defense lawyer, especially in murder cases, rape, or other serious felony matters as they may need time to prepare.

When Does Speedy Trial Rights Start?

As stated above, Under Article I, Section 15, of the California Constitution, your right to a speedy trial begins at either:

For a Serna motion to dismiss under the California Constitution, the California criminal court judge will consider only two main factors to determine if your speedy trial rights were violated. These factors include:

It should be noted that prejudice will not be presumed if there is a long delay. You must be able to show the delay caused you some type of harm.  If harm can't be proven, it's unlikely your charges will be dismissed using a Serna motion under California state constitution.

If it can be shown the prosecutor violated your speedy trial rights, then all charges against you must be dismissed. If your Serna motion is unsuccessful, you can still go through the California criminal appeals process to appeal the decision. If motion is denied and you are convicted of the charges, you can appeal your conviction.

Under the Sixth Amendment United States Constitution, the clock starts on a misdemeanor case after the following occurs:

The clock starts running on a felony case after the following occurs:

It should be there is one major difference between the Federal and California law on Serna motions. Under federal law, a felony complaint doesn't start the speedy trial clock running, rather only an actual indictment or information.

After you file a speedy trial motion to dismiss under the US Constitution, the judge will determine whether or not the delay in bringing you to trial was unreasonable under the Sixth Amendment.

The main factors that will be considered include:

It's important to note the actual reasons why the prosecutor delayed in bringing you to trial is a critical factor in a federal Serna motion. Additionally, the degree of prejudice, commonly known as “harm” to a defendant is also a critical factor in determining a speedy trial motion.

If you need additional information about a California speedy trial motion, commonly known as a Serna motion, contact our Los Angeles criminal defense lawyers to review the specific details of your case.

Legal rights to a speedy trial motions can be complicated and require a close examination by a highly experienced lawyer. If you have been arrested, let us review the details and provide legal advice to move forward with your defense. We serve clients throughout Southern California from our Los Angeles County office.