Brandishing a Weapon Laws in California 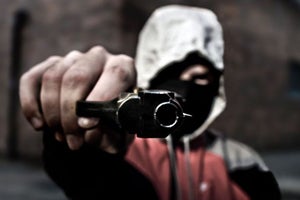 Penal Code 417 PC prohibits anyone from drawing or exhibiting a deadly weapon in a rude or threatening manner in someone's presence.

Brandishing a weapon laws are covered under California Penal Code Section 417. In basic terms, this law prohibits anyone from drawing or exhibiting a deadly weapon in a rude or threatening manner in the presence of another individual.

It's important to note here that it is not necessary that you actually intended to harm the alleged victim or if they even saw your weapon.

By law, the criminal offense of brandishing a weapon has been committed the moment you draw, exhibit, or use your weapon in a rude, angry or threatening way. What exactly is considered “rude, angry, or a threatening manner?”

This is frequently a key element used by our Los Angeles criminal defense attorneys in defending our clients against charges of brandishing a weapon.

A deadly weapon can be any instrument or weapon that is dangerous or that can be used in a manner capable of causing great bodily injury or death. This could include anything from a baseball bat, broken bottle, brick, or an actual weapon. What if you used a fake gun? You can still be convicted of a misdemeanor crime you threaten someone with an imitation firearm. See related page: Assault With a Deadly Weapon.

If you have been accused of brandishing a weapon in Los Angeles County, you should immediately contact a Los Angeles criminal defense attorney at Eisner Gorin LLP. If contacted by a police detective, exercise your legal right to remain silent. Just politely tell the detective you don't want to make any statements without first consulting with an attorney.

Otherwise, you might make incriminating statements that could be used against you later in court. Police detectives are paid to build a criminal case against you in order to make an arrest. Don't help them. See Related:

Now that we have discussed the basic concepts of a brandishing a weapon charge above, let's examine the legal definition below.

Under California Penal Cpde Section 417, the legal definition of brandishing a weapon states:

In order to be convicted of brandishing a weapon, the Los Angeles County prosecutor has to be able to prove, beyond any reasonable doubt, the following elements of the crime:

All of the elements of the crime above need to be closely examined by a criminal lawyer when preparing an effective defense strategy. If the prosecutor is unable to prove each and every element of the crime, then you can't be guilty of brandishing a weapon.

There is no legal requirement that you pointed the weapon at the victim, fired the gun, or that the victim saw the weapon. See related: Assault with a Firearm and Negligent Discharge of a Firearm.

What is considered a Deadly Weapon?

Under California law, a deadly weapon is any object, instrument, or weapon that is deadly or dangerous or one used in such a way that it is capable of causing great bodily injury or death. The term “great bodily injury” means significant or substantial physical injury.

A deadly weapon does not include parts of your body, such as a fist or knee. A deadly weapon could be a hammer, ax, rocks, brass knuckles, belt buckle knife, pipe, razor, among many other objects. A firearm is any device designed to be used as a weapon that expels a projectile. This could include pistols, rifles, or shotgun. Consult with a Los Angeles criminal defense lawyer at our law firm for more information.

If you are convicted of brandishing a weapon other than a firearm, it's a misdemeanor offense punishable by a sentence of 30 days in the county jail. Other violations are known as “wobblers,” meaning it could be filed as either a misdemeanor or felony crime based on different factors.

These factors include the specific circumstances of your case and prior criminal record.  Let's examine some circumstances where you would receive a misdemeanor sentence for brandishing a weapon. If convicted of drawing a deadly weapon in a rude or threatening manner or during a fight, you will face a minimum 30 day sentence in the county jail.

If convicted of brandishing a firearm (pistol or revolver) in a public place, or another type of firearm that can be concealed on your body, you could face a three month to a one year jail sentence, and a fine up to $1,000 fine.

Now, let's take a look at some circumstances where you could face misdemeanor or felony sentencing. If convicted of drawing or exhibiting a firearm in a rude, angry, or threatening manner or during a fight on the grounds of an open child day care center, you could face a misdemeanor sentence of three months to one year in jail, or a felony sentence of up to three years in a California state prison.

If convicted of drawing or exhibiting a firearm in a rude, angry, or threatening manner in the immediate presence of a peace officer engaged in the performance of their duties, you could face a misdemeanor sentence of up to one year in jail, or a felony sentence of up to three years in California state prison.

An experienced Los Angeles criminal defense lawyer can use a variety of legal defenses on your behalf. These include:

If you are facing an allegation of brandishing a weapon, you should call a Los Angeles criminal defense lawyer at Eisner Gorin LLP as soon a possible. A misdemeanor or felony conviction can have a tremendous impact on your life.

Early intervention into your case by our skilled attorneys could be critical to the outcome. We are available to thoroughly review all the details and discuss legal options. Call our law firm at 877-781-1570.