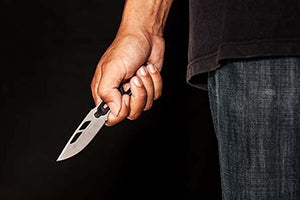 PC 417 makes it a crime to draw or exhibit a deadly weapon in a threatening way in the presence of someone else.

Have you been charged with brandishing a weapon or firearm in Los Angeles? A conviction could result in life-altering consequences. You should consult with our experienced criminal defense lawyers at Eisner Gorin LLP as soon as possible.

We have over six decades of combined experiences and will aggressively fight for the best possible outcome on your case.

Under California Penal Code Section 417, it is unlawful to:

It should be noted that if you unlawfully use a deadly weapon in a fight or quarrel, it's also considered a brandishing a weapon offense under PC 417.

What exactly is a deadly weapon?

A deadly weapon can be anything from a:

In fact, it's defined as “any object, instrument, or weapon that is inherently deadly or dangerous or one that is used in such a way that it is capable of causing and likely to cause death or great bodily injury.”

In order for the Los Angeles County prosecutor to prove you brandished a weapon under Penal Code 417, they must be able to show certain factors, which is commonly known as the “elements of the crime.” These include:

Not Acting in Self-Defense

In California, brandishing a weapon is generally a misdemeanor punishable by as much as a year in the county jail. Penal Code § 417(a)(2) provides, in relevant part, that

Each part of the sentence quoted above provides guidance on the types of incidents covered by the brandishing law.

First, the statute only applies in cases where the defendant was not acting in self-defense. Put another way, brandishing a weapon or firearm in the course of defending oneself is not a crime.

Additionally, there is no requirement that the firearm in question be loaded to trigger a brandishing violation.

A conviction for brandishing a weapon or firearm requires proof beyond a reasonable doubt that the defendant drew or exhibited a firearm in a rude, angry, or threatening manner.

At trial, defense counsel will attack each of these elements. If there is insufficient proof that the defendant in fact drew or exhibited a firearm, for instance based on unreliable eyewitness testimony, then the defendant is not guilty.

Likewise, there may be proof that a weapon or gun was drawn, but the defendant may have been acting with an intention that was not rude, angry or threatening such as to defend himself or another person.

While brandishing a firearm is typically a misdemeanor, certain violations can rise to the level of a felony and therefore subject the defendant to the possibility of California state prison time.

Legal Defenses for Brandishing a Weapon

Which defense will be the most effective at a jury trial will of course depend on the particular facts and circumstances of the case. However, several defenses are commonly employed in brandishing a firearm cases.

First, it can be argued that the defendant did not display or exhibit the weapon in a rude or threatening manner.

This is essentially a factual defense in that eyewitness testimony, audio or video recordings, or other objective third-party evidence will be critical in establishing this defense.

In more unusual cases, there may be a bona fide issue as to whether the object drawn or exhibited was in fact a firearm. Especially at longer distances and at poor vantage points, eyewitnesses may not be reliable in terms of their observations.

What may appear to be a gun, depending on the witness' point of view, might actually be some other benign object. Again, rebuttal testimony by other eyewitnesses, who perhaps had a better angle at which to accurately assess the nature of the object in question, is critical to a successful defense.

Self-defense is also a common defense to brandishing a firearm. Many individuals who carry firearms do so legally and are licensed to carry precisely because their employment, celebrity status, or history of prior victimization by threats or stalking makes it prudent for them to carry a weapon for self-protection.

In a scenario in which the defendant is actually a victim of an attempted crime and draws their firearm purely in an attempt to defend themselves, they might nevertheless be falsely accused of brandishing by the actual perpetrators.

In such cases, the credibility of the alleged victim or victims is central to the prosecution's case. Independent investigation geared toward establishing what the victim's motive to falsely accuse the defendant is an important component of an effective defense.

Finally, it should be noted that brandishing a firearm does not require that the defendant actually point the weapon at the alleged victim, much less fire the weapon. These more serious gun crimes are handled through charged of:

Brandishing requires only that the gun be displayed in an angry, rude, or threatening manner. For this reason, the victim or victims need not ever have been in actual danger, such as in the case of an unloaded firearm.

If you or a family member have been accused or arrested on a weapons charge, it's critical that your consult with our skilled criminal defense lawyers as soon as possible.

We have a track record of success and understand how the Los Angeles County District Attorney's Office will attempt to build their case against you.

Through our pre-filing intervention strategy, it might be possible to avoid the filing of formal charges. We need to first review the facts and circumstances of your case in order to develop a defense plan for the best possible outcome.

Our law firm has defended numerous clients charged with brandishing a firearm in both felony and misdemeanor cases.

If you, or someone you know, is charged with one of these serious criminal cases, call our office for a consultation. We serve clients throughout Southern California, including Los Angeles County, Riverside County, Ventura County, and San Bernardino.