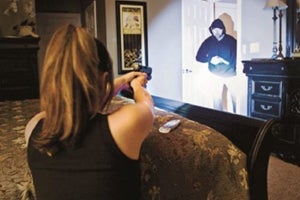 Self-defense means you had a reasonable belief you were in imminent danger of being injured had to use force to prevent it.

This key phrase is frequently hotly debated by criminal defense lawyers in all Los Angeles County criminal courthouses. So, in the context of using self defense as a legal defense, what exactly does this mean under the law?

It means you need to have had a reasonable belief you were in imminent danger of being injured or killed, and reasonably believed you had to use force to prevent it, and didn't use more force than necessary.

In Los Angeles County, domestic violence incidents and other types of violent crimes such as brandishing a weapon or firearm, there is frequently a debate over using self defense to justify why our clients acted in a certain manner.

Unfortunately, law enforcement does not always consider self defense when responding to an incident where the actions of someone may have been justified.

Police will often acknowledge it may exist, but normally defer the situation to the Los Angeles County District Attorney's Office on whether self-defense should bar prosecution. A common example of self defense includes a situation where someone is walking home at night and approached by a man holding a knife.

He tells them to give him their wallet. The victim pulls out a gun and shoots and kills the robber. In this example, the victim would not be prosecuted for murder under California Penal Code 187 as they were acting in self-defense from imminent danger.

This example shows that if you are you are facing a reasonable threat of being injured or killed, you don't have to retreat under California law. As long as you were not the one to make the first strike, a skilled Los Angeles criminal defense attorney at Eisner Gorin LLP could make a convincing argument that you legally acting in self-defense. Let's take a closer look at some legal definitions below.

California Self Defense - The Castle Doctrine

While California is not a stand your ground state, it recognizes what is known as the “castle doctrine," which applies to your home, business, or other real property. It means if you are using deadly force to protect property, there is no legal duty to retreat.

However, your rights end when the person is no longer on your property. Additionally, any force that is used against an intruder must be proportionate to the harm reasonably feared.

California Penal Code Section 198.5 describes that you can use deadly force within your own home as long as you have a reasonable fear of imminent danger or great bodily injury.

Therefore, if another person unlawfully forces their way into your home, the following elements have to occur for it to be considered justifiable use of deadly force:

Obviously, there are situations of self-defense that occur outside your home. California law also recognizes your legal right to use deadly force in self defense, known as “justifiable homicide.”

This legal right is contained under California Jury Instructions Calcrim #505 and Calcrim #506, where jurors are instructed to find you innocent of homicide or other charges if you acted “reasonably” under the circumstances, meaning:

As stated above, this means that under California self defense laws, you don't have to just run away if you are faced with a reasonable threat of being injured or killed, but you can't make the first strike.

Self-defense can be used as a legal defense for a variety of crimes that include murder, assault with a deadly weapon, aggravated assault, and aggravated battery. It's important to note in order to use a legal defense of self-defense; you have to be able to prove you were under imminent danger.

This means you have to show you were about to be injured, killed, or raped. The term “about to” means immediately or right away. Contact a Los Angeles criminal defense attorney at our law firm to review your specific case and how the self defense laws may apply.

In Los Angeles LAX Airport Superior Court, the criminal defense lawyers at Eisner Gorin LLP were able to successfully use a self-defense argument to have murder charges against a father and son dismissed. In this case, a father and son team were attempting to cash in on the marijuana boom after changes to California's marijuana laws.

After they travelled to California to make an investment, they were in the act of making a transaction, when they were robbed at gunpoint. In self-defense, one of our clients used a gun to shoot the robber, who died at the scene. Our clients panicked and fled the scene. While police were actively searching for suspects, they retained our criminal law firm represent them.

We immediately hired a former Los Angeles police detective to investigate their claim of self-defense, and to help us surrender them into custody. At this time, we also presented our self defense position to the police, which included evidence that supported the lawful use of deadly force.

After sitting in on police interrogations, we were able to secure the release of our clients within 48 hours.

In the end, our attorneys were able to convince the Los Angeles County prosecutor that the evidence clearly demonstrated our clients legally acted in self defense, had no criminal history, while the person who was attempting to rob them was just released from prison and had a loaded firearm next to his body. The murder charges were dismissed.

In Los Angeles County, there are a wide range of crimes where criminal defense lawyers will typically examine using a self-defense claim. Most fall under the category of a violent crime (link), but not all of them. These criminal offenses include:

If you have been charged with a crime and self-defense may be your best legal option, contact the Los Angeles criminal defense attorneys at Eisner Gorin LLP.

In certain situations, we may be able to successfully use a self defense argument on your behalf. Every case is unique and we will need to closely review the details.