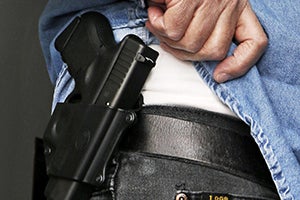 Penal Code 25850 PC makes it a misdemeanor or "wobbler" offense to carry a loaded firearm in a public place or a vehicle.

Carrying a loaded firearm in a public place or vehicle is covered under California Penal Code Section 25850. A violation of this statute is typically a misdemeanor crime, but could be charged as a felony case if there are specific aggravating circumstances.

It should be noted that while this offense is similar to carrying a concealed firearm under California Penal Code Section 25400, it's a separate crime. In spite of the Second Amendment of the United States Constitution permitting people to own or possess firearms, there are exceptions that must be followed at the risk of criminal prosecution.

As the name of the offense clearly implies, it's a crime in Los Angeles County to carry a loaded firearm in public or in a vehicle.

While it sounds simple and obvious, it's not always the case. For example, in order to be convicted for violating Penal Code Section 25850, the prosecutor must prove you had knowledge the firearm was loaded.

A firearm is considered “loaded” if there is:

If it can't be proven you knew the firearm was loaded beyond a reasonable doubt, you can probably avoid a conviction. It should be noted that BB or pellet guns are not considered a firearm under PC 25850 and it doesn't matter whether the firearm was operable at the time of the offense.

If you have been accused of carrying a loaded firearm in your vehicle or a public place, you should consult with the experienced Los Angeles criminal defense lawyers at Eisner Gorin LLP. Our law firm has a track record of success defending clients against any type of weapons related charges.

A conviction could have a long lasting impact on your personal and professional life.

Now that we have covered a general overview on the crime of carrying a loaded firearm in a public place or vehicle, let's take a thorough look at the specific legal definition, penalties, and potential legal defenses below.

Legal Definition of Carrying a Loaded Firearm in Public

California Penal Code Section 25850 defines the crime of carrying a loaded firearm in a public place or vehicle as follows:

A firearm is defined under California law as a device that is designed to be used as a weapon where a projectile can be expelled through a barrel by force of an explosion. Clearly, this would include a revolver, pistol, rifle or shotgun.

A public place is defined as any location that is open and accessible for general use by the public.

A prohibited area is defined as any place where it's unlawful to discharge a firearm. Additionally, if you carry a firearm in public, a police officer has the right to examine your firearm in order to determine if it's loaded.

If you refuse to let them examine it, your conduct is sufficient probable cause for arrest under California Penal Code Section 25850.7.

It's important to note there are some exemptions to Penal Code section 25850, meaning you can't be convicted of unlawfully carrying a loaded firearm in a public place or vehicle if:

It should be noted in order to qualify for the hunter exemption, you must carry your firearm to and from these locations in a locked container. If you need additional information about the legal definition or if you might possible qualify as an exemption, contact our Los Angeles criminal defense law firm.

If order for the Los Angeles County prosecutor to convict you of carrying a loaded firearm in a public place or vehicle in violation of California Penal Code Section 25850, they must be able to prove all the “elements of the crime,” beyond any reasonable doubt.

These elements include the following:

As stated above, it's important to note the firearm you are accused of carrying doesn't have to be in a working order. In other words, if the firearm is inoperable or broken, it doesn't matter as it was designed to shoot and it had the physical appearance it was operable.

Legal Penalties for Carrying a Loaded Firearm in Public

If you are convicted of carrying a loaded firearm in a public place or vehicle under Penal Code 25850, it's typically a misdemeanor crime that carries a legal penalty of up to one year in a Los Angeles County jail, a fine up to $1,000, and summary probation. However, if there are aggravating factors, then PC 25850 becomes a “wobbler” or a straight felony crime.

A wobbler means the prosecutor has the discretion to file the case as either a misdemeanor or a felony offense. They will typically base their decision on the specific circumstances of your case and your prior criminal history. You can be charged with a felony case if:

If you have been accused of carrying a loaded firearm in a public place or vehicle is covered under California Penal Code Section 25850, our Los Angeles criminal defense attorneys have a wide range of potential legal defense strategies to help you obtain the best possible outcome.

Keep in mind that every case is unique and would first require a careful examination of all the specific details. However, there are many common legal defenses, including the following:

You didn't know you were carry a firearm: Go back to the elements of the crime above that state the prosecutor has to be able to show you knew you were carrying a firearm. In some case, our lawyers may be able to challenge this critical point.

Clearly, this defense is best suited for case where the firearm was not on your person. Perhaps we could argue the firearm was in a bag or the trunk of your car and we can make a reasonable argument you simply were not aware of its presence.

The firearm was not loaded: As stated, PC 25850 requires the firearm to be loaded. Perhaps our attorneys could argue there were no bullets in the chamber or the clip was not attached as defined. Perhaps you keep the ammunition separate from the firearm. If the prosecutor can't prove it was loaded at the time of the alleged crime, you can probably avoid a conviction.

Unlawful search and seizure: In some cases, our lawyers might be able to argue you were unlawfully searched by police in violation of your Fourth Amendment right against unreasonable searches. Remember, police must have probable cause to detain you and conduct a search of your person or vehicle.

In other words, they have to have a legal reason to stop and search you in the first place. If we can successfully argue the firearm was seized as the result of an unlawful search and police needed a warrant, then the firearm would not be able to be used as evidence against you and your case would most likely be dismissed.

Other potential legal defenses include a self-defense argument, you were not in possession of the firearm, and a “mistake of fact” defense.

In some cases, where there is a misunderstanding, mitigating or exculpatory evidence showing innocence, our lawyers might have a chance of negotiating with the prosecutor to avoid formal charges from being filed in the first place.

We could submit character letters, exculpatory information, and other favorable information to the Los Angeles County prosecutor responsible for filing the criminal charges against you.

This is our chance to tell your side of the story in an effort to convince the prosecutor to reject your criminal case. It's should be noted the prosecutor only knows what the police tell them, which is always damaging information proving guilt.

Our pre-filing intervention strategy has a track record of success and gives the prosecutor a chance to review all the evidence before making a decision to file charges against you.

If you are facing accusations of carrying a loaded firearm in a public place or vehicle that violated California Penal Code Section 25850, contact the highly experienced Los Angeles criminal defense attorneys at Eisner Gorin LLP.

We will closely examine the facts and circumstances in order to develop a defense strategy to obtain the best possible outcome on your case. It starts with a phone call to speak with our lawyers. Contact our law firm at 877-781-1570 to review your case and legal options.