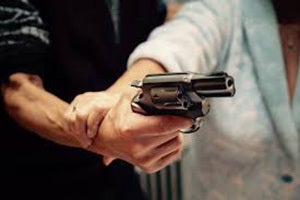 If you are convicted of a California domestic violence related offense with use of a firearm, you could be facing felony charges and harsh peenalties.

If you are convicted of domestic violence in California, you can be facing severe life-altering consequences. Depending on the details of you case, this can include county jail or state prison time and large fines. You might even lose your right to possess or own a firearm for life.

Additionally, in certain domestic violence cases involving using a deadly weapon, you might be charged with assault with a deadly weapon under California Penal Code 245(a)(1) as a felony offense. If convicted of a felony, there are more severe penalties and possibly a “strike” under California's Three Strike Law.

If the deadly weapon involved was a type of firearm, such as a gun or pistol, you might be charged with assault with a firearm under California Penal Code 245(a)(2).

It should be noted the firearm doesn't have to be fired in order to be charged with this offense, rather just pointing a loaded firearm at a spouse, boyfriend, girlfriend, cohabitant, or family member during a domestic dispute can result in a serious felony crime.

In domestic violence related cases where the firearm was not loaded, but operable, you might be charged with brandishing a weapon under California Penal Code 417. This crime is a “wobbler” that could be charged as either a misdemeanor or felony crime by the prosecutor, but is not a “strike.”

If the crime was against an intimate partner or family member and the court placed you on probation, then you will be facing mandatory domestic violence sentencing requirements that is described under California Penal Code Section 1203.097.

To give readers a better understanding of domestic violence with firearms, our Los Angeles criminal defense lawyers are providing an overview below.

Domestic Violence and Assault with a Firearm

If the victim of the crime was some type of domestic partner and you were convicted of assault with a firearm under California Penal Code 245(a)(2), you will probably be placed on probation.

This means there will be mandatory terms of probation described under California Penal Code 1203.097. These terms include the court issuing a domestic violence restraining order that prohibits you from making any type of contact with the victim. However, in some cases, the judge has the discretion to reduce the order to a level one protective order that permits peaceful contact.

As part of probation, you will also be required to complete a 52-week batterer's intervention program, pay fines, and complete community service. The judge could also impose other conditions of probation at sentencing, including some jail time and mandatory counselling.

Due to a domestic violence conviction, you will be prohibited from possessing or owning a firearm in California for life. Assembly Bill 3129 amended California Penal Code 29805 and prohibits anyone from firearm possession who was convicted of misdemeanor domestic violence.

California law also allows criminal courts to prohibit you from possession or purchasing a firearm in a situation where you have been charged with domestic violence, but not yet convicted.

Under Federal law, you would be banned from possessing or owning a firearm regardless of whether the domestic violence offense was a felony or a misdemeanor.

If you are subjected to certain court orders listed below, you will be prohibited from owning, possessing, purchasing, or attempting to purchase or receive ammunition while the order remains in effect:

Also, anyone can seek a domestic violence protective order, prohibiting possession or purchase of firearms against a spouse or former spouse, dating partner cohabitant, or family member.

After you are served with a California domestic violence protective order, you must relinquish your firearm by surrendering it to law enforcement or sell to gun dealer within 24 hours.

If you are convicted of a domestic violence offense, you will have to provide proof the firearm was sold or transferred within a certain timeframe after the conviction.

Probation officers and the court are also required to verify that you complied with this requirement before the final resolution of your case. The court could even issue a search warrants to recover illegally retained firearms from anyone who fails to comply.

All law enforcement agencies in California have to establish a system for recording domestic violence related calls, including a written incident report on whether a weapon was involved.

If any type of deadly weapon is discovered by a police officer at the scene of a domestic violence incident, it is subjected to confiscation.

All law enforcement officers at the scene of a domestic violence incident that involves threats or assault must take temporary custody of any firearm that is in plain view or that is discovered during a consensual search or a lawful search that was conducted to protect other people at the scene or the police officers.

Any firearms that were confiscated firearms must be held for at least 48 hours. If the firearm is not retained as evidence related to domestic violence criminal charges, or illegal possession, it has to be made available back to the owner within 48 hours after it was seized, or as soon as possible, but no later than five days after the demonstrates they went through a background check.

If you have been accused of domestic violence in Los Angeles, our criminal defense lawyers can review the case and legal options moving forward. We may be able to negotiate with the prosecutor for reduced charges or even a case dismissal through prefiling intervention.