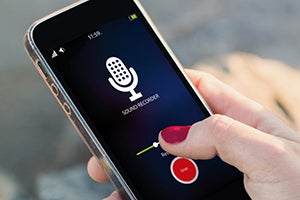 Penal Code 632 PC eavesdropping is generally described as the crime of recording of confidential communications without consent.

California is a so-called “two-party consent” state with regard to recording conversations. This means that in general both parties to a conversation must be aware that it is being recorded and consent to that recording or else the act of recording itself is unlawful.

California's recording of confidential communications law under Penal Code § 632 criminalizes such unlawful recording and subjects a defendant who is found guilty of violating this statute to imprisonment in the county jail or potentially the state prison as well as being required to pay a substantial fine.

Virtually any analog or electronic technology which allows the listener to amplify, in the case of eavesdropping, or record a confidential communication between two or more parties will qualify under the wiretapping law.

Confidential communication is similarly defined in a relatively broad way. Any communication which by its circumstances indicates that the parties to the communication wished it to remain private will qualify.

Obvious excepts would therefore include public meetings, speeches by politicians, musical concerts (though recording such events may violate venue rules), etc. These types of public events are by their nature not meant to remain private.

The wiretapping statute therefore most often applies to conversations between two private parties.

The most common defendants faced with Penal Code § 632 are individuals who are one party to such communications and record them without the knowledge of the other party.

A closely related crime to eavesdropping is illegal wiretapping under California Penal Code 631.

To help our readers better understand criminal recording of confidential communications law under PC 632, our California criminal defense lawyers are providing an overview below.

Anyone who intentionally without consent of all parties in confidential communication, uses an electronic amplifying or recording device to eavesdrop or record communication, whether it's among the parties in presence of each other or by means of a telegraph, telephone, or other device, will be punished by imprisonment in county jail for up to one year, a fine up to $2,500, or both jail and fine.

It's important to note that California's law on eavesdropping makes it a crime to a very specific type of eavesdropping. In order for the prosecutor to convict you, they will have to be able to prove – beyond reasonable doubt – the elements of the crime listed in CALCRIM 1809 Jury Instructions:

Are There Any Exceptions?

For this reason, an undercover officer can record his interactions with a suspect without the suspect's knowledge without violating the law. Evidence obtained in this fashion can be introduced lawfully into court proceedings even though a private party who engaged in the same conduct might be prosecuted for doing so.

A limited exception is found in Penal Code § 633.5, which makes it clear that one party to an otherwise confidential communication is not prohibited by law from recording the conversation without the other party's knowledge or consent if the purpose of making such a recording is to obtain evidence of the other party's commission of certain crimes.

These crimes include extortion, bribery, kidnapping, or any felony involving violence against the person including, but not limited to, human kidnapping or domestic violence.

Section 633.5 further provides that any evidence obtained pursuant to this exception is not rendered inadmissible by the fact that it was recorded without the other party's knowledge or consent.

For this reason, evidence of domestic violence, for instance, recorded under circumstances which would otherwise render the conversation private and therefore subject to Section 632, can be introduced at trial against the recorded party.

Whether or not the limited exception in Section 633.5 applies in a particular case is a fact-intensive and case-by-case inquiry.

If you are concerned with whether making a surreptitious recording of a conversation is lawful under Section 633.5, or prohibited by the general rule in Penal Code § 632, you would be advised to contact a Los Angeles criminal defense lawyer at our law firm for a consultation.

A judge who issues a restraining order could include a provision allowing a domestic violence victim to record any prohibited communication made by the perpetrator that violates the restraining or protective order under California Penal Code 273.6. Finally, an exception would also include law enforcement responding to an emergency situation.

A violation of Penal Code § 632 can be punished as either a misdemeanor or a felony, making the crime of eavesdropping or wiretapping a “wobbler,” under California law.

For a misdemeanor violation, the maximum punishment for a first violation of Penal Code § 632 is one year in the county jail and a $2,500 fine.

Penal Code § 632 prosecutions for eavesdropping or wiretapping are serious criminal offenses which potentially expose the defendant to state prison time.

There are a variety of defense strategies our lawyers could use to fight against the eavesdropping charges. These include making an argument the communication was not “confidential,” or the recording was an accident. We could also argue the communication was reasonably capable of being overheard by a third party or even argue the alleged victim is exaggerating the circumstances.

If you or someone you know is under investigation for one of these crimes, our experienced criminal defense attorneys can offer you an initial consultation to discuss your best options. Call us to review the details.