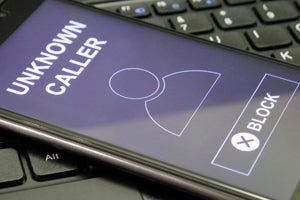 Making annoying phone calls in covered under California Penal Code Section 653m. In basic terms, it's a crime to make repeated or harassing phone calls, or to make a phone call using obscene or threatening language.

Just a single incident of harassing by phone is sufficient to support a criminal charge of annoying phone calls under Penal Code Section 653m(a).

If there were multiple phone calls, which would be considered repeated harassment, a criminal charge could be filed under Penal Code Section 653m(b). It's important to note that making a harassing or annoying phone call is not just limited to calling with a telephone.

It also applies to sending obscene text messages, email, or other forms of an electronic message. Annoying phone calls are more serious than simple prank calls.

For those old enough to remember, before caller ID was available as a standard feature, making annoying calls from your home telephone by your kids was a common prank. It was just for some laughs.

He is not happy with the child visitation arrangement, but she will not let him visit the kids more often. In frustration and anger, he starts making threatening phone calls. The situation spirals out of control and she decides to pursue criminal charges against him for making repeated harassing and obscene phone calls.

Additionally, she files for a domestic violence restraining order against him, which makes it even more difficult for him to spend time with his kids. For only a single incident of harassment by phone, it's not a criminal offense unless the alleged victim is able to prove the phone call was placed with the specific intent to harass, or that the language that was used during the phone call was obscene or threatening.

This is frequently difficult to prove. However, if there is evidence in phone records that show numerous phone calls, it could be sufficient to file criminal charges of annoying or harassing phone calls under PC 653(m).

One of the most common methods to support annoying phone call charges is the use of voice mails by the caller. The exact amount and length of phone calls, the relationship between the alleged victim and caller, are important factors considered by a Los Angles County prosecutor on whether to pursue criminal charges.

If you have been accused of making annoying or harassing phone calls, you need to consult with a Los Angeles criminal defense lawyer at Eisner Gorin LLP as soon as possible. A criminal conviction could impact you future opportunities for many years.

Let our attorneys review all the facts and circumstances of your case in order to determine a solid defense strategy. Now that we have covered a basic overview of making annoying phone calls above, let's take a closer look at the legal definitions, penalties, and legal defense below.

Every person who, with intent to annoy or harass, makes repeated telephone calls, or  repeated contacts using an electronic communication device, or makes any combination of calls or contact, to another person is guilty of a misdemeanor. Nothing in this subdivision applies to telephone calls or electronic contacts made in good faith or during the ordinary scope of business.

Penal Code Section 653m(a) only applies if you made a single phone call. The LA County prosecutor has to be able to prove you intentionally made the phone call to annoy, or you used obscene language, or you made a threat to inflict great bodily injury or death.

In cases where you threatened to commit great bodily injury or death, the prosecutor could decide to file charges of criminal threat, under California Penal Code Section 422. It's important to note that a phone call, text message, emails, or other form of communication must be more than just simply annoying to be considered a criminal offense.

Typically, it must involve the use of threats, obscene language, or the making of repeated harassing phone calls. In Los Angeles County, making annoying call charges are often connected to a domestic violence, or stalking cases. Contact a Los Angeles criminal defense lawyer at our law firm for more detailed information.

What is considered “obscene language?” This important question is often decided by a jury as it's sometimes difficult to determine. The language does not have to be sexual in nature to be considered obscene. It could be language that is considered offensive, or violates general standards of what is appropriate.

Profanity could be considered obscene. The relationship between the alleged victim and the caller can prove to be an important factor in determining whether the language used was obscene.

Intent to Harass or Annoy

What is considered “intent to harass or annoy?" This seems pretty obvious, but it's important to make note that you can't be convicted of making annoying phone calls, unless the prosecutor is able to prove that you intended to annoy or harass the victim when you made the phone call.  In general, phone calls that are made for legitimate business reasons will not qualify as annoying telephone calls.

If you are convicted of making annoying phone calls, or sending any other annoying electronic communication, you are guilty of a misdemeanor crime. A violation of California Penal Code Section 653m carries up to 6 months in a Los Angeles County jail, a fine up to $1,000, or both jail and a fine.

The court also has the option of just sentencing you to misdemeanor probation or a suspended sentence. In these types of sentencing, the judge could order you to mandatory counseling. If you need additional information, call our Los Angeles criminal defense law firm.

If you are proven to have made criminal threats, in violation of California Penal Code Section 422, you could be found guilty of a more serious crime if you threaten great bodily injury or death, or specifically intended your communication as a treat, and you caused the victim to fear for their own safety, or safety of their family or property due to your threat.

Criminal threats, under PC 422, are a “wobbler,” meaning it can be charged as either a misdemeanor or felony offense. If convicted of misdemeanor criminal threats, you could face up to 1 year in a Los Angeles County jail, a fine up to $1,000, or both jail and a fine.

If convicted of felony criminal threats over the phone or an electronic communication device, you could face up to 3 years in a California state prison, a fine up to $10,000, or both prison and a fine. Other related criminal offenses include;

It's important to remember that the LA County prosecutor carries the burden of proof in cases that involve making annoying phone calls or harassing electronic communications.

If they can't prove the all elements of the crime, you should not be convicted. If you have been charged with making annoying or harassing phone calls, a skilled Los Angeles criminal defense attorney at our law firm can use a variety of legal defenses on your behalf. These include:

Language was not obscene – In cases where the prosecutor is accusing you of making annoying phone calls using obscene language, our criminal lawyers may be able to argue that your language was not obscene. For example, you have a constitutional right to free speech. Therefore, the courts will typically have decided what language is obscene very carefully. We could use an effective defense strategy to prove the calls were not made using obscene language.

Mistaken identity or false allegation – In same annoying phone calls cases, our attorneys may be able to prove with phone records or other documentation you were not the person making the annoying or harassing calls. In other cases, we may be able to show you were falsely accused by a spouse who was angry or wanted revenge during a child custody battle.

Again, in making annoying or harassing phone call charges, intent is a key element in the crime that has to be proven. You may be charged with this offense, but our criminal defense lawyers will aggressively work to show a lack of intent, or maybe you were just playing a prank.

If you have been accused of making annoying or threatening phone calls, you should expect a call from a police detective who was assigned to your case. Be polite, but decline to answer any questions without first consulting with an attorney. The detective is not your friend. Next, contact a Los Angeles criminal defense attorney at Eisner Gorin LLP.

Our lawyers will need to closely review the facts and evidence in order to start developing a strong plan to defend you. We offer a free immediate response. Contact our law office at 877-781-1570.