Speaking To Police Without A Lawyer Is Not A Good Idea 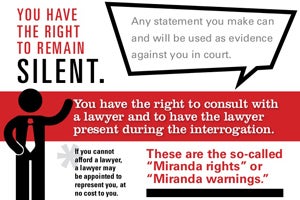 if you are under a criminal investigation or already arrested, it's never a good idea to speak to law enforcement with a lawyer.

The defense attorneys at Eisner Gorin LLP often must contend with incriminating evidence in court, in the form of statements made by the client after the police giving of Miranda warnings.

Often this is some of the most difficult testimony to defend against, as the words are directly from the client.

Our lawyers frequently contest the introduction of this evidence, as violating our client's Miranda rights under the U.S. Constitution. Most people are familiar with the Miranda warnings which law enforcement are required to provide to suspects prior to questioning a suspect in custody.

First, and arguably most important among these warnings, is that anything you say can be used against you in court. The negative consequences of ignoring this warning, and making a statement, are discussed in the excellent video “Don't Talk to the Cops,” featuring Professor James Duane: Watch Video.

In our law firm's experience, even after being given the Miranda warnings, many individuals choose to waive their right to remain silent and make statements to police.  The reasons for this decision vary, but tend to fall into several general categories.

First, many suspects think they can talk their way out of a bad situation by providing an innocent explanation for their conduct.

They falsely assume that they can provide a plausible enough version of events that they can clear their name.  Law enforcement may have evidence against the suspect prior to the questioning which they are not required to disclose.

In that scenario, every falsely exculpatory detail provided by the suspect simply becomes more evidence of guilt.

The Real Purpose of a Police Interrogation

Second, in the case of truly innocent individuals, there may be a desire to be helpful or cooperative.  Arrestees may assume, incorrectly, that the police are questioning them simply to get to the bottom of the situation, or that police require their help to resolve the situation.

Out of a genuine desire to do the right thing or assist law enforcement, an innocent individual may inadvertently provide inaccurate or inconsistent statements in the heat of the moment.

While the intention was to be truthful by the client, inconsistencies or incomplete statements may be seized upon by police, as evidence the individual has something to hide, and used against him/her in court.

It is important to remember that the primary purpose of a police interrogation is to gather inculpatory statements to assist in the prosecution of the suspect, not to simply discover the truth.

Our criminal defense lawyers will assess the facts of your case at the initial consultation to determine whether a client should participate in a police interview.

We have had instances of having cases being dropped after presenting our client's story to law enforcement including charges of homicide, robbery, rape, and child molestation.

A third mistaken belief which leads individuals to give statements to the police occurs in the case of a suspect who is guilty of something, but innocent of the much more serious misconduct the police may suspect.

In this scenario, the suspect might think that making a minor admission will earn them credibility or respect from the interrogator and that they will therefore be cut a break.  This is simply not the case.

Once an admission of minor criminal conduct has been obtained, law enforcement will frequently characterize this as “minimization,” concluding that the individual is in fact guilty of more serious conduct which he or she does not wish to disclose. Again this evidence will be used against the client in court.

Law enforcement officers are trained in interrogation techniques which are calculated to reliably elicit admissions of criminal conduct.

Keep in mind that an interrogator is:

Consider the reality of the situation you face in a police interrogation.  On one side, you have rarely or more likely never been subject to a pointed, well-rehearsed, calculated attempt to elicit statements from you.

On the other side is typically a seasoned detective or office who has undergone specialized training in interrogation.  In short, whether you are guilty of something, or guilty of nothing, there is absolutely no benefit to providing a statement to law enforcement.

Luckily, you have a constitutional right not to be subject to law enforcement questioning, and certainly not without the presence of your attorney.

A recent case handled by our firm illustrates the downside of making a statement.  Our client was accused by his wife of sexual misconduct involving the couple's young child.  There was no physical evidence to support the claim and significant evidence to undermine the wife's credibility.

However, the client was arrested and placed in an interrogation room with a detective.

Out of a desire to be helpful, the client, who had been drinking, attempted to provide details about the events of the night in question.  The inevitable inconsistencies and statements which could be twisted in an incriminating way proved to be the prosecution's most, and arguably only, credible evidence.

While our attorneys were able to settle the case on the eve of trial in a favorable way for the client, his decision to provide a statement potentially exposed him to a life sentence. That charge was dropped, but ultimately the whole case may have been dismissed had it not been for his statements to the police.

If you, or someone you know, is under a criminal investigation or has been arrested, we encourage you to call our experienced criminal defense attorneys at Eisner Gorin for a consultation immediately.

We will intervene with law enforcement on your behalf before court to maximize your chances of preventing a formal criminal filing, and causing all charges to be dropped even after an arrest takes place. Contact us at 877-781-1570.