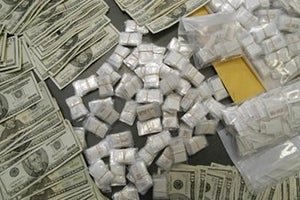 Our law firm has represented numerous defendants charged with drug trafficking and/or drug sales of narcotics in both California State and federal courts. Depending on the quantity and type of narcotics involved, these prosecutions can involve serious felony charges potentially exposing the defendant to lengthy prison sentences.

Several important legal issues tend to recur in drug cases which an experienced criminal defense attorney must be familiar with to effectively advocate for the best outcome for their clients.

While general principles of criminal and constitutional law apply equally to drug cases as to all criminal cases, certain specific factors are of special importance in these particular cases.

First and foremost, the distinction between a trafficking, transportation, or sales case and a simple possession case is critical. A drug trafficking charge can be the result of transporting, buying or selling of any controlled substance or illegal drug.

In many cases, people get accused of drug trafficking, but only possessed the drugs for personal use.

California Health & Safety Code Section 11351 list over 100 specifically named controlled substances. Drug possession of most narcotics is unlawful under State law, and also certainly invloving federal drug crimes, the penalties associated with possession only for personal use are drastically lesser than those associated with a sales or trafficking situation.

This distinction might mean the difference between probation or even a diversionary outcome leading to a dismissal and a multi-decade stint in prison. While some cases clearly fall into one category or the other, effective advocacy can blur the lines or what might otherwise appear at first glance to be an obvious case of sales, or possession for sales.

Let's review the different factors and potential legal defenses below.

Quantity of Drugs and Defendant's Conduct

One critical factor in determining whether a case involving drugs is a sales case or a possession case is obviously the quantity of drugs seized. It will be much more difficult to convince a jury or a judge that a defendant possessing a massive quantity of narcotics did so purely for personal use reasons.

Many quantities, however, are ambiguous. Picture a defendant who is stopped by law enforcement, perhaps in a routine traffic stop, and found to be in possession of several ounces of cocaine. While the defendant has more than the average user in terms of quantity, the amount is also not so huge that personal use is out of the question.

In such cases, other facts and circumstances about the defendant's conduct become critical. Was the defendant also in possession of a large sum of cash? What about baggies, scales, or other paraphernalia associated with the selling of narcotics?

In many cases, local law enforcement or agents of the Drug Enforcement Administration (DEA) will seize the defendant's cell phone. Are there a pattern of calls, text messages, or social media interactions which show the defendant setting up transactions with potential buyers?

In other cases, law enforcement or federal agents may have surveilled the defendant prior to their arrest. Was there evidence gathered in this surveillance consistent with sales, such as multiple individuals coming and going from the defendant's residence at all hours?

In borderline cases, an effective presentation of the evidence relying on these details, and others, can raise reasonable doubt that sales activity has occurred. For example, California Health & Safety Code Section 11350 criminalizes possession of a controlled substance, but goes one step further as it includes intent to sell.

In some cases, we may be able to make a valid argument you didn't intend to sell the controlled substance.

Even in cases where the defendant is clearly engaged in trafficking and sales, disputes over the quantity of drugs may be critical to obtaining the best possible plea bargain.

Particularly in federal court, where the draconian sentencing guidelines lead to massively increased penalties for defendants based on the quantity of drugs involved in the crime, it is essential to litigate exactly what type and quantity of drugs was seized by law enforcement.

It's important to note there have been changes in federal sentencing under the First Step Act.

This seems like a straightforward question - the drugs must be weighed on a scale.  However, experienced criminal defense attorneys will be familiar with situations in which the weight is not a straightforward question, such as when the packaging used to hold the narcotics is included in the weight, or where multiple substances, or substances of different purities are involved.

Ultimately the facts and circumstances of each drug case are unique and the avenues of defense will depend on a close analysis of the evidence produced in discovery combined with independent defense investigation, including potentially the use of a defense expert witness specializing in drug cases.

Another recurring issue in drug trafficking and sales cases is search and seizure. The Fourth Amendment to the United States Constitution protects individuals from unreasonable searches and seizures. In general, warrants must be obtained before searching an individual's belongings or person.

However, there are numerous exceptions to this rule. Whether one or more exceptions to the warrant requirement apply is an issue which must be litigated in court through a motion to suppress.

If successful, a motion to suppress will typically result in the dismissal of the charges, as all evidence of the defendant's possession of narcotics will be deemed inadmissible.

Consult with our Law Firm for Help

A California state or federal trafficking conviction will carry severe penalties. The exact punishment typically depends on the substance and quantity of it. Your prior criminal record will also have a substantial influence on penalties of drug trafficking.

Clearly, any type of drug trafficking case can lead to imprisonment for many years and will carry heavy fines.

Moreover, these type of charges will normally have a life-altering impact on your personal and professional life. If you, or a family member has been accused of drug trafficking or sales, contact our experienced criminal defense attorneys for a consultation.

We serve clients throughout Southern California including Los Angeles County and the San Fernando Valley. Contact our law firm at 877-781-1570.