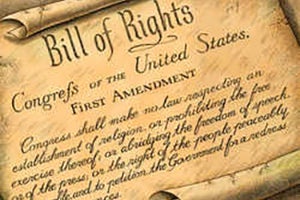 In both federal and California State courts, issues related to protected free speech under the First Amendment to the United States Constitution are occasionally presented. In this country, most people know the First Amendment provides for freedom of speech.

Specifically, it states that “Congress shall make no law … abridging the freedom of speech.”

The United States Supreme Court has said that just about every form of freedom stems from the fundamental right to free speech (Palko v. Connecticut, 302 U.S.). However, frequently overlooked, is the application of the First Amendment as an important defense against criminal charges.

For example, California laws prohibit people from threatening or harassing other people. If they are criminally charged with violating a law based on their free speech, they could have a valid First Amendment defense.

A straightforward defense available to criminal defendants is that the law they are being prosecuted under is unconstitutional as applied to their conduct, but it requires them to show their speech doesn't fall into one of the categories of unprotected speech.

It's important to note that in the vast majority of criminal cases, free speech is simply not an issue. For example, statutes punishing robbery, theft, or murder are directly aimed at the defendant's conduct, and any speech involved in the case is only tangentially involved.

However, certain types of offenses, depending on how they are charged and the specific underlying facts of the case, may implicate free speech protections.

In those cases, it is critical to have a criminal defense attorney defending you who is familiar with the various First Amendment doctrines which may prohibit your prosecution.

Please consider the following scenarios which are drawn from actual cases in which our firm has represented the criminal defendant.

In a federal prosecution alleging a RICO conspiracy, our client was alleged to have posted computer code online which allegedly functioned as an identity theft program to illegally gather the personal and financial information of unsuspecting members of the public.

The scheme, which consisted of dozens of individual members of an online web forum who would exchange ideas on how to commit financially related fraud, supposedly resulted in many millions of dollars in losses total and impacted hundreds, if not thousands, of victims.

While many members of the conspiracy were alleged to have taken direct actions to commit fraud against identifiable members, our client was alleged only to have posted the computer code itself on the online forum.

We took the position that our client's postings were speech within the meaning of the First Amendment, despite the fact that his speech arguably facilitated criminal activity by others.

Case law supports the proposition that even crime-facilitating speech, if not coupled with incitement to imminent criminal behavior or actual conduct in furtherance of illegal activity, cannot be penalized by the government absent compelling reasons to do so.

On a date after the client had been served with the restraining order, he allegedly took to a public online customer-review website which readers would be very familiar with and posted a lengthy, derogatory review of the service provider's skills and competence, encouraging other potential customers to go elsewhere.

The government filed charges against the client alleging that he violated the restraining order's prohibition on harassment and intimidation by posting the online customer review.

Our firm demurred from the complaint, which is permissible under California law prior to entering a guilty or not guilty plea, arguing that the contempt charge violated the client's right to free speech under the First Amendment as applied to his conduct.

Our position focused on three related, but distinct, First Amendment doctrines which have been announced by the United States Supreme Court. First, a criminal statute which has the effect of restricting speech cannot be so vague as to leave a defendant unaware that his or her conduct was actually criminal.

For instance, statutes have been struck down which purport to criminalize speech which is “annoying,” or “opprobrious.” These terms are so vague that there is no objective, clear standard for which speech is criminal and which is not.

Similar to the vagueness doctrine, the overbreadth doctrine allows a court to strike down a statute which allows law enforcement to selectively arrest some individuals for speech activity while leaving others alone. Essentially, a statute is overbroad where its terms allow enforcement against a substantial amount of constitutionally protected speech, even though some legitimately unlawful conduct is also prohibited.

For instance, a statute stating that no one may make loud amplified speeches on the doorstep of a courthouse would likely be upheld as it leaves open ample alternative channels for communication and restricts only the place and manner (on the courthouse steps, at a very loud volume) of the speech, but not the content.

Conversely, a statute which made it a crime to speak any words critical of the justice system near the courthouse would almost certainly be struck down as an unjustifiable content-based restriction.

First Amendment law is complex and continues to evolve.  As stated above, the majority of criminal prosecutions don't implicate the First Amendment.

Therefore, many criminal defense lawyers don't recognize potential legal defenses. If you, or someone you know, is charged with a crime which may implicate the free speech protections of the federal Constitution, we encourage you to each out to our experienced criminal defense attorneys for a consultation.

We have long track record of success defending clients against all type of California state and federal crimes. We need to first review the specific details of your case in order to determine legal options.