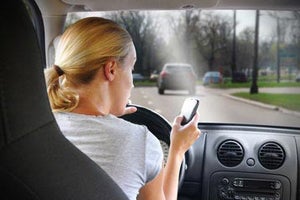 VC 23102 reckless driving is broadly described as anyone who drives a vehicle in a willful disregard for the safety of people or property.

Reckless driving is covered under California Vehicle Code 23103, which covers a broad range of different types of unsafe driving behavior on the crowded roads and highways in Los Angeles County.

A reckless driving offense should not be confused with a speeding citation which is simply a traffic violation.

Reckless driving is a misdemeanor crime that carries more than just a fine. In fact, the legal penalties carry some jail time and probation. Reckless driving is known as a discretionary arrest misdemeanor offense, which means the police officer can issue you a citation, or make an arrest and take you to jail.

Under VC 23102, reckless driving is vaguely described as anyone who drives a vehicle in a willful disregard for the safety of people or property. As you can see, this broad description leaves room interpretation, but the legal consequences for a conviction are clear.

If you are found guilty of a first offense of reckless driving, you could be facing up to 90 days in jail, huge fines, getting your car impounded for 30 days, and having your California driver's license suspended.

If you are convicted or reckless driving as a second or third offense, or if another person was injured due to your reckless driving, you will face a one year mandatory suspension of your driver's license and 6 months in a Los Angeles County jail.

If you have prior points on your driving record, it could even result in a longer driver's license suspension. If you are facing charges of reckless driving, an experienced Los Angeles criminal defense lawyer at Eisner Gorin LLP will provide aggressive legal representation to obtain the best possible outcome. We can help you decide whether to accept a plea bargain in your case.

As stated above, the vague legal description under Vehicle Code 23103 leaves a lot of room for challenging your charges. Now that we have covered a general overview of reckless driving charges, let's take a more thorough examination of the legal definition, penalties, and potential legal defenses below.

As you can see from the legal description above, reckless driving not a traffic violation, rather it's actually a misdemeanor crime. Under VC 23013, a highway is a street that is open to public driving and an off-street parking facility is parking areas open to the public, which includes parking lots at retail stores or malls, but does include privately owned parking lots that are not open to the general public.

A wanton disregard for the safety of other people means you were aware that your actions presented a substantial and unjustifiable risk of harm, and that you intentionally ignored the risk. It's important to note that speeding alone is not sufficient to prove you were driving reckless. If you need additional information, call a Los Angeles criminal defense attorney at our office.

It's important to note that due to the vague definition of reckless driving under VC 23103, many forms of irregular driving could be considered reckless if your actions are considered serious enough.

Common sense does come into play here and the main factor is typically whether a reasonable driver would realize the driving is some type of danger to other people.

If convicted, the legal penalties include up to 6 months in a county jail and a fine.

However, if another person is seriously injured, or your were driving under the influence (DUI), then it's a “wobbler,” meaning the Los Angeles County prosecutor can file the case as either a misdemeanor or felony offense.

Under California Vehicle Code 23105, reckless driving that results in serious injuries to a third party is a wobbler if the injuries include broken bones, concussion, a wound requiring stitches, or a brain injury. If you are convicted of felony reckless driving that caused serious bodily injuries, in violation of VC 23105, the legal penalties include:

If someone was killed due to your reckless driving, you could face the following charges:

It should be noted that Watson Murder charges typically involve situations where someone was driving under the influence and another person was killed. It's commonly known as a DUI murder. The legal penalties if you are convicted of a Watson Murder include 15 years to life to a California state prison.

Our Los Angeles criminal defense attorneys could use a wide variety of potential legal defenses on your behalf against charges of reckless driving, in violation of California Vehicle Codes Sections 23103, 23104 or 23105. These include:

You were not driving recklessly – It's important to note the Los Angeles County prosecutor has the burden of proof to show, beyond any reasonable doubt, you were driving recklessly. Reckless driving is more than just negligence or irresponsible driving.

It means the DA would need to prove you had an intentional lack of regard about the safety of others, or that you had knowledge a serious injury would be the probable due to your driving. This can often be difficult to prove. Our criminal defense lawyers might be able to cast some doubt on these important elements of the crime.

In other words, the most common defense to reckless driving is to show your conduct while driving did not amount to recklessness. Our law firm has seen cases where the police believed someone was driving reckless, but the circumstances at the specific time didn't sufficiently support criminal charges of reckless behavior.

For example, we might be able to successfully argue your vehicle has some type of mechanical failure that caused you to drive in an erratic manner, but it was not an intentional act.

If you have been accused of reckless driving in violation of California Vehicle Code 23103 or 23105, you need to consult with a skilled Los Angeles criminal defense lawyer at Eisner Gorin LLP.

We may be able to get your reckless driving charges reduced to a lesser offense or completely dismissed, saving you from a driving license suspension.

Additionally, our lawyers might be able to get an acceptable plea bargain on your misdemeanor crime reduced a simple traffic infraction, resulting in reduced fines and no points on your driving record.