What Defines a Crime of “Moral Turpitude” Under California Law? 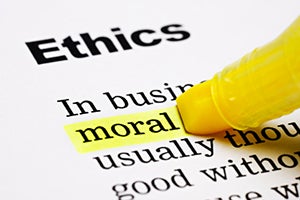 California crimes of moral turpitude are those that either involve fraud or lying, or those which “shock the conscience.”

As Los Angeles criminal defense attorneys, we are often asked by clients and family members whether a certain offense is a crime of “moral turpitude,” or not.

This distinction can be critically important for clients considering whether to accept a plea deal or fight a case at trial, especially if the client is facing potential collateral consequences such as adverse immigration action or loss of a professional license, such as a real estate, medical, or legal license.

Though much less serious for the typical client, a conviction for a crime of moral turpitude can also be used to impeach the defendant's credibility in a future legal proceeding.

Some clients, such as those in law enforcement, may expect to testify frequently in future cases and must consider whether a conviction for a crime of moral turpitude will therefore negatively impact their ability to continue being effective in their job.

There is no statutory definition for a moral turpitude crime, but it's generally described as a crime that involves conduct of dishonestly, fraud, or morally reprehensible.

In order for the Los Angeles County criminal court judge or jury to classify a crime involving moral turpitude (CIMT), they must be provided with the specific facts and evidence in the case and then be asked to make a determination if your conduct was so egregious that your crime should be classified as a crime of moral turpitude.

An important factor in determining crimes involving moral turpitude is that they typically are intent crimes, meaning the elements of the crime must include some type of criminal intent. A crime of moral turpitude is supposed to be a crime that is morally reprehensible, not a crime of a mistake or just a bad judgment call.

Thus, the specific crimes that are frequently classified as involving moral turpitude include the following:

Disagreement arises in the marginal cases where reasonable people can disagree about whether the conduct at issue is so harmful to society that it “shocks the conscience.” While different courts may hold differently, some general principles are worth noting.

It is unlikely that a court would find someone's conduct to be morally shocking for a so-called “strict liability” crime, such as a parking offense or offenses which require only negligence as a mental state.

Conversely, criminal statutes which require knowing or willful conduct are more likely to be held to be crimes of moral turpitude. Courts disagree over whether crimes which require recklessness, a mental state in between negligence and intentional conduct, can qualify as morally turpitudinous.

Federal courts frequently interact with the crime of moral turpitude definition in the immigration consequences. For that reason, the federal courts have developed an analytical framework known as the “categorical approach.”

Under this test, the federal court will examine the generic offense, meaning simply the elements required to convict, of which the defendant was convicted.

This approach is termed categorical, because the specific facts of the actual case are not examined.

Rather, the federal court looks only at what facts the jury must have found to convict the defendant of the particular statute. The court then compares that definition to the standard for moral turpitude.

The situation is further complicated because many State statutes provide alternative theories under which a defendant may be convicted. In some cases, the federal court might be inclined to find crimes involving moral turpitude if the defendant was convicted on one of these theories, but not others.

In these cases, a federal court employs the “modified categorical approach,” which begins with an examination of the generic offense as in the categorical approach, but then moves on to encompass a limited amount of additional documents such as the indictment, the jury instructions, a guilty plea, if any, or the sentencing transcript.

With these additional documents, the federal court can determine more accurately which version of the statute the defendant was actually convicted under, and thereby assess moral turpitude.

Outside of immigration, our clients most frequently encounter questions about moral turpitude in the context of professional licensing.

Certain jobs will require that you receive and maintain a professional license. For example, attorneys, teachers, and doctors could certainly face adverse consequences if convicted of a crime of moral turpitude.

Many professional licensing boards at the State level draw a distinction between criminal convictions which do and do not involve moral turpitude.

These distinctions may include the requirement to self-report an arrest or conviction, and the level of discipline which will be imposed, up to and including loss of licensure, on the licensee.

For our clients with licensing concerns, a letter from a licensing specialist, union representative, or other individual familiar with the particular industry our client works in is critical to help the client understand the pros and cons of accepting a plea deal, for instance. In some cases, what would otherwise be an acceptable resolution to a case may be too risky for the client based on their licensure.

Finally, there is the issue of witness credibility. If you have been convicted of a crime involving moral turpitude, it will obviously limit your effectiveness as a reliable witness.

For example, if you are called to testify as a witness in a legal proceeding you will be facing close scrutiny. Once you are convicted of a crime involving moral turpitude, the opposing attorney will frequently use your CIMT to impeach your credibility as a witness.

Clearly, this means your prior crime can be used to challenge your testimony in court.

This is commonly known as the “impeachment of witnesses”, and is the introduction of evidence about your criminal history in order to convince the jury not to believe your testimony.

In Los Angeles County criminal trials, prior felony convictions that are considered a crime of moral turpitude can always be admitted to impeach a witness.

If you are facing criminal charges that could be considered a crime of moral turpitude, contact the Los Angeles criminal defense attorneys at Eisner Gorin LLP. A conviction can have life-altering consequences on your professional and personal life.

If you, or a family member, is facing criminal charges and are particularly concerned with whether the charges will be considered a crime of moral turpitude, contact our experienced criminal defense attorneys at 877-781-1570 for a consultation.