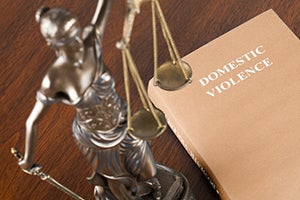 When you are accused of a California domestic violence offense, the case can be filed as either a misdemeanor or felony crime based on a different factors.

Domestic violence is described as physical or sexual violence against a current or former spouse, cohabitant, roommate, boyfriend, girlfriend, someone who has a child with the victim, or some other type of relationship that falls under the criminal domestic violence statute. In some cases, domestic violence occurs between people who have a former relationship, or used to live together.

Domestic violence can include a physical attack, such as punching, pushing, shoving, grabbing, choking, slapping, throwing objects, raping or sexually assaulting the victim. Typically, domestic violence crimes are acts that could be considered an assault, battery or sex crimes.

When someone is arrested for a domestic violence offense, they can be charged with either a misdemeanor or felony crime based on a variety of factors, which is commonly known as the infamous California “wobbler.”

While there are many California domestic violence statutes covering different type of incidents, the most common charges are Penal Code 243(e)(1), domestic battery, which is always a misdemeanor. The other is Penal Code 273.5, corporal injury to a spouse, which is a “wobbler” than can be charged as a felony.

The primary reason why this is significant is because of the penalty differences between a misdemeanor and felony crime in California.  In some cases, an initial felony domestic violence case can be reduced to a misdemeanor.

It's important to have a clear understanding between a domestic violence misdemeanor and felony offense and what exactly the differences mean for someone who is facing criminal charges.

To give readers a better understanding between a misdemeanor and felony domestic violence case, our Los Angeles criminal defense attorneys are providing an overview below.

Clearly, a felony is the most serious criminal offense in California. Anyone convicted of a felony crime could be sentenced to time in a California state prison.

Also, a felony conviction results in being placed on formal probation for a certain amount of time where they are required to meet with a probation officer. The judge has the discretion to impose up to one year in jail as a condition of felony probation.

Additionally, a felony conviction in California carries significant collateral consequences, such loss of gun and voting rights, loss of a professional license, loss of employment and housing opportunities. There is also potential immigration consequences, such as deportation for undocumented immigrants.

A misdemeanor is a crime that can be punished by up to one year in a county jail. Most people convicted of a misdemeanor are placed on informal probation, but might have to serve some jail time as a condition of probation. There are no formal meetings with a probation officer.

As stated, certain felonies are considered “wobblers,” that can be charged as either felonies or misdemeanors. Prosecutors will usually take into consideration the specific facts of the case and defendant's criminal history in order to determine exactly what charges to file.

In some cases, the judge could reduce a felony to a misdemeanor under California Penal Code 17(b), when the offense is a wobbler.

It should be noted there is often a thin line between misdemeanor and felony when it comes to domestic violence cases.  In order to be found guilty of domestic violence, someone has to commit some type of abuse against a person whom they have had domestic relationship with.

It doesn't always have to be a family member or a spouse for the crime to be considered domestic violence. However, the law defines this crime as against a spouse, roommate, parent to defendant's child, people who are dating, among others.

Domestic violence offenses are charged and punished in many different ways depending on a wide range of different factors. For example, the circumstances of the case, nature of the relationship, level of injuries, and defendant's criminal record.

As stated, Penal Code 243(e)(1) domestic battery is a very commonly charged domestic violence offense in California. It's described as committing battery against a cohabitant, spouse, fellow parent or someone defendant has dated, but there is no requirement of any visible injuries. Domestic battery is always charged as a misdemeanor.

Penal Code 273.5, corporal injury to a spouse is another commonly charged domestic violence offense. It's described as inflicting physical injury on a cohabitant, spouse, fellow parent or someone the defendant has dated. PC 273.5 is a “wobbler” and the prosecutor could decide to reduce the charge to a misdemeanor if the injuries are not serious.

In many domestic violence related cases, a defendant is arrested for corporal injury to a spouse in violation of Penal Code 273.5. However, before arraignment, the filing Deputy District Attorney reviews the details of the case to determine what charges to file.

Normally, a prosecutor files felony charges when there are visible injuries or when the defendant has a history of domestic violence offenses. Penalties are enhanced when the victim suffers a serious or great bodily injury.

Penal Code 422 criminal threats is described as threatening someone with serious harm. It's also a wobbler that can be charged as either a misdemeanor or a felony.

Penal Code 646.9 stalking is described as repeatedly harassing or threatening someone to a point where they are in fear of their own safety, or safety of their immediate family. Stalking is also a wobbler. A misdemeanor conviction carries up to one year in county jail, or up to three years in state prison for a felony.

Other domestic violence crimes include:

Factors that Affect the Type of Domestic Violence Charge

As stated, the prosecutor uses many different factors when determining whether to charge the defendant with a misdemeanor or felony. They always consider the severity of the injuries that the victim suffered.

They also review any prior reported incidents of abuse by the victim or others people against the alleged abusers. Finally, another major consideration is whether the defendant has any other domestic violence convictions.

If you were accused of any type of domestic violence offense, call our Los Angeles criminal defense attorney to review the details of the case and legal options.